Symrise with continued sales growth of 7.1 % 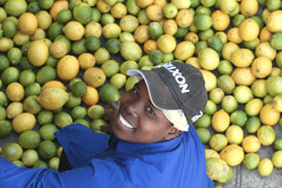 Following a dynamic first half of the year, Symrise AG stayed on its growth course in the third quarter. All segments benefited from good demand. Group sales for the nine-month period increased to € 2,551 million (9M 2018: € 2,383 million). This represents a 7.1 % growth in reporting currency.

"We successfully continued our growth course in the third quarter. Also, with weaker economic conditions in some countries, we were able to make very good use of business opportunities and to grow in all segments. We also implemented investment projects according to plan and created additional production and research capacities. This ensures that we will continue to be well positioned in the future to deliver optimal performance in meeting our customers' needs and expectations. For the remaining weeks of this year, we believe that we are in a good position and are confident that we will achieve our growth and profitability targets for 2019," said Dr. Heinz-Jürgen Bertram, CEO of Symrise AG.

The Fragrances division was an important growth driver in the segment and achieved double-digit organic sales growth. Substantial sales gains were seen in particular in the Fine Fragrances business unit and the new Consumer Fragrances business unit, which combines the Beauty Care and Home Care application areas. The strong demand in all regions and price increases were important factors behind the healthy growth. Organic growth in the Oral Care business unit was in the single digits, with increases achieved mainly in the Asia/Pacific region.

In the Cosmetic Ingredients division, growth was in the single-digit range following the strong increases in the previous year. The Asia/Pacific and Latin America regions showed particularly expansive trends, especially in the national markets of China and Colombia.

The Aroma Molecules division saw moderate organic growth as compared to the high figures from the previous year. The increase in internal use of fragrance ingredients impacted the external growth. As the backward integration was expanded, significantly higher amounts of the capacity were used in own compositions.

In the Flavor segment, which supplies flavors for foods and beverages, sales increased 5.8 % to € 965.5 million (9M 2018: € 912.5 million). Adjusted for exchange rate effects, organic growth amounted to 4 %. The Latin America and Asia/Pacific regions and the Savory business unit contributed substantially to the increases in sales. The Sweet business unit, by contrast, has experienced slower growth in sales after the dynamic trend in the previous year. An important factor in that regard has been the normalization of raw material prices for some natural products.

In the EAME region, the Flavor segment achieved an organic growth rate in the single-digit range. The strongest impetus came from applications for savory products and beverages in Germany, Russia and the Middle East.

The Asia/Pacific region achieved organic growth in the high single-digit range, especially in the Beverage and Savory business units. In some cases, growth was in the double-digit range. Key drivers behind the increases were the markets in Indonesia, China, Singapore and Thailand.

Through the first nine months of the year, North America experienced moderate sales growth. Yet, the Savory business unit showed a dynamic trend, in particular through extensive new business with global and regional customers.

Business in Latin America also showed dynamic growth, with organic growth in the double-digit range. All business units achieved strong gains, especially in the national markets of Brazil and Mexico.

The Nutrition segment, which includes the Diana division, with applications for food and pet food as well as probiotics, achieved a 9.4 % increase in sales to € 516.0 million (9M 2018: € 471.4 million). In local currency the organic growth was higher, at 10 %.

The main growth driver for the Nutrition segment was again the Pet Food business unit, which achieved very good double-digit growth, especially in the national markets of the USA, Colombia and Brazil.

In the Food business unit, the Latin America and Asia/Pacific regions reached good growth rates, especially in the national markets of China, Mexico and Chile. In the EAME and North America regions growth was relatively modest.

Sales in the Aqua business unit continued to show a positive trend, especially in the EAME region, which achieved growth rates in the double-digit range.

Probiotics experienced single-digit growth in the period under review. In local currency, sales were at the same level as in the previous year. The North America region, which accounts for the majority of sales revenues, suffered from slower market growth. Growth in the EAME region was in the double-digit range.

Looking ahead to current fiscal year with confidence

Against the backdrop of the positive business development in the first nine months, Symrise is confident that it will meet its targets for the full year 2019. Symrise continues to expect sales growth of 5 to 7 % and to exceed the growth rate of the relevant market by a significant margin again this year. The market is projected to grow at a rate of 3 to 4 % worldwide. In addition, Symrise remains committed to its profitability guidance, as adjusted in August, and is aiming for an EBITDA(N) margin of approximately 21 %.

New technologies and initiatives to increase efficiency have been rolled out and implemented globally in 2019. Symrise has also continued to focus on high-margin applications. These measures are beneficial to the positive trend in earnings and cash flow.

The long-term targets also remain fully in effect: Symrise aims to increase its sales from around € 5.5 billion to € 6.0 billion by the end of 2025. This is to be achieved through organic growth at an annual rate of 5 to 7 % (CAGR) combined with additional targeted acquisitions.

In January, Symrise announced the planned acquisition of the US-American company ADF/IDF, a meat and egg-based protein specialist. The transaction is subject to customary regulatory approvals. The deal is expected to close in the fourth quarter of 2019. 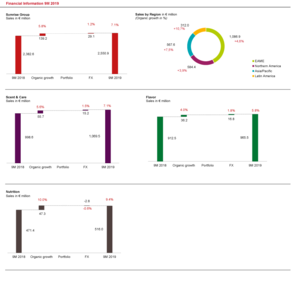