— Despite high capital expenditures, increase in dividend to € 0.75 per share

In the fiscal year 2014, Symrise AG exceeded its targets and substantially expanded its market position. The Group benefited from good demand in all regions and in both segments as well as from a particularly strong performance in the fourth quarter. In addition, with the acquisition of the Diana Group in July 2014, Symrise succeeded in entering the baby food and pet food markets and was able to expand its portfolio of natural ingredients. For the full year, Group sales increased by 18 % at local currency to € 2,120.1 million (2013: € 1,830.4 million). Earnings before interest, taxes, depreciation and amortization as normalized for one-time effects from the acquisition and integration of Diana (EBITDAN) increased by 24 % to € 464.5 million (2013: € 373.1 million). With an EBITDAN margin of 21.9 % (2013: 20.4 %), Symrise ranks again among the most profitable companies in the industry.

Dr. Heinz-Jürgen Bertram, Chief Executive Officer of Symrise AG, said: "2014 was a very successful year for Symrise. We considerably expanded our market position in Mature and Emerging Markets and significantly broadened our port-folio of natural ingredients through the acquisition of Diana. But, most importantly, we once more created value and substantially increased sales, earnings and profitability. As a result, we are in an excellent position, both strategically and financially, to continue our profitable growth in 2015 and to outperform the market again."

Outstanding Profitability with EBITDAN Margin of 21.9 %
The robust demand and the resulting high capacity utilization had a substantial impact on the further improvement in profitability. In addition, Symrise continued with its consequent cost management. One-time effects in the amount of € 30 million were incurred through the acquisition and integration of the Diana Group. Normalized earnings before interest, taxes, depreciation and amortization (EBITDAN) increased by 24 % to € 464.5 million in 2014 (2013: € 373.1 million). At local currency, this equates to an increase of 27 %. Symrise boosted its normalized EBITDA margin to an outstanding 21.9 % (2013: 20.4 %).

Expenses impacting the financial result increased in the year under review by € 11.1 million to € - 48.4 million due to one-time, non-recurring financing costs pertaining to the Diana Group acquisition. The net income for the fiscal year 2014 as normalized for special effects increased to € 211.6 million. The reported net income increased to € 185.0 million (2013: € 172.3 million). The reported earnings per share increased to € 1.48 (2013: € 1.46), and would have amounted to € 1.69 without special effects which equals an increase of 16 % as compared to the previous year.

Against the backdrop of the strong earnings performance, the Executive and Supervisory Boards propose to the Annual General Meeting a dividend increase to € 0.75 (2013: € 0.70) for fiscal year 2014.

Scent & Care Segment
The Scent & Care segment continued to focus on high-margin business in 2014. The segment increased sales in local currency by 4 % to € 980.4 million (2013: € 960.4 million); in the reporting currency, this represents an increase of 2 %. Scent & Care made very satisfactory gains, especially with Cosmetic Ingredients.

Since July 2014, the sales and earnings contributions of the Diana Group have been consolidated in the segment’s results. Including Diana, Flavor & Nutrition increased its sales by 34 % at local currency to € 1,139.7 million (2013: € 869.9 million). In the reporting currency, this represents an increase of about 31%. Diana Group contributed sales of € 233.9 million.

Outlook 2015 – Long-Term Goals Fully Intact
In the current fiscal year, the Group expects to benefit from solid customer de-mand and high capacity utilization in both segments as well as in Mature and Emerging Markets. Prices of raw materials will continue to influence the cost development in 2015. Although the costs of chemical commodities were down at the end of 2014, prices of various agricultural raw materials showed signifi-cant increases. Consequently, Symrise expects continued volatility in raw material prices as well as certain currencies. According to estimates, the global market for fragrances and flavors is growing at 2 % to 3 % per year. For 2015, Symrise remains committed to its goal of growing faster than the market and achieving an EBITDA margin of more than 20 % for the Group.

In addition, Symrise confirms the objectives defined for the fiscal year 2020, namely a compound annual growth rate (CAGR) of 5 to 7 % and an EBITDA margin in the range of 19 % to 22 %. 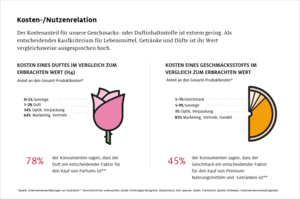 Its sales of more than €2.1 billion in 2014 place Symrise among the top three companies in the global flavors and fragrances market. Headquartered in Holzminden, Germany, the Group is represented in over 40 countries in Europe, Africa and the Middle East, Asia, the United States and Latin America.