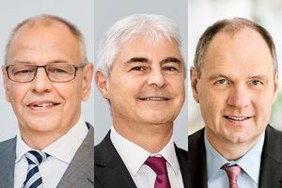 — Heinrich Schaper, President of the Flavor segment, to enter retirement
— Combination of the segments Flavor & Nutrition into one segment headed by Dr Jean-Yves Parisot
— Resignation of Achim Daub, President of Scent & Care, by mutal agreement

Symrise AG makes changes to its Executive Board effective 1 April 2021. Heinrich Schaper, Executive Board member and responsible for the Flavor segment, will be retiring and leaving the Company on 31 March 2021. In the course of succession planning, the Supervisory Board has decided that Dr Jean-Yves Parisot is to take over the global leadership of the Flavor segment in addition to his responsibility for the Nutrition segment. This will involve combining the Flavor & Nutrition activities in one segment. Achim Daub, who has been Board member since 2006 and responsible for the Scent & Care segment, has decided to pursue new professional opportunities. He will therefore also leave the Company on 31 March 2021 by mutual agreement and on best terms. Succession planning for the leadership of the Scent & Care segment has already been initiated. On an interim basis, the CEO of Symrise AG, Dr Heinz-Jürgen Bertram, will lead the segment. Executive Board member Olaf Klinger will continue to head the finance, legal and IT department.

Michael König, Chairman of the Supervisory Board said: "With Heinrich Schaper and Achim Daub, we are saying goodbye to two very committed leaders who have significantly shaped Symrise strong position. Heinrich Schaper served Symrise and its predecessor companies for more than four decades. Today's global presence of the Flavor segment and the excellent relationships with major customers are due to a far-sighted strategy. We wish him all the best for the next chapter in his personal life. On behalf of the Supervisory Board, I would also like to thank Achim Daub. He has consistently driven forward the growth and expansion of the fragrances business over the past 15 years and very successfully developed new application areas. For his professional and personal future we also wish him all the best."

"At the same time, we are pleased that as of 1 April 2021 Dr Jean-Yves Parisot will assume global responsibility for the Flavor business in addition to the leadership of the Nutrition segment. By combining the two activities, Symrise will be able to leverage the strengths of the new Flavor & Nutrition segment even more effectively, increase customer penetration and further differentiate itself in the market. We wish Dr Jean-Yves Parisot great success and look forward to continuing our good collaboration. Planning for the leadership succession in the Scent & Care segment has already been initiated and will be announced in due course."

Jean-Yves Parisot (56) has been Head of the Nutrition/Diana business unit since 2014 and a member of the Executive Board of Symrise AG since October 2016. In his role, he was most recently responsible for the successful acquisition of ADF/IDF in the U.S. Prior to the acquisition and integration of Diana Group, he headed the Food Division within the Diana Group for five years. Before joining Diana, he held senior positions in several global pharmaceutical, chemical and biotech companies, including Air Liquide, Danisco and Rhodia. He started his career in Sales & Marketing at Pfizer. Jean-Yves Parisot holds a Doctor degree in Veterinary Medicine, and an MBA from HEC Paris.

Heinrich Schaper (64) has held various management positions at Symrise AG and its predecessor companies for more than four decades. In October 2016, he was appointed President of the Flavor segment. Among other positions during his career at Symrise, he was Vice President Flavor in the U.S., where he was responsible for expanding the business, and was previously responsible for developing the U.K. market as Divisional Manager. Heinrich Schaper began his professional career in 1975 after obtaining a degree in Industrial Management.

Achim Daub (58) joined Symrise AG in 2004, assuming global leadership of the Fragrance division in 2005 and was appointed to the Executive Board in 2006. He has consistently driven the expansion of the Scent & Care segment, particularly in France and in the U.S. Under his leadership, the Scent & Care segment also very successfully developed the world's first and only fully functional artificial intelligence system in perfumery. Before joining Symrise, Achim Daub had worked for Procter & Gamble for many years.

You will find pictures of our company in our media library.