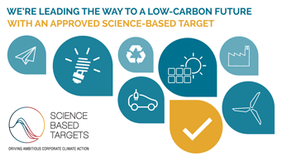 The number of companies with scientifically recognized climate targets exceeded 100 for the first time in April 2018. The global Science Based Targets initiative (SBT) certifies the climate targets of interested market participants according to whether they are in line with current research and are working to reduce CO2 emissions on par with the standards of the Paris Climate Agreement. Symrise, the globally active manufacturer of fragrances and flavorings, is one of twelve German companies that have participated so far. The Holzminden-based company is ahead of its own schedule when it comes to implementation.

In order to have their scientifically based climate targets recognized, the companies submit their plans to the Science Based Targets initiative, whose experts examine them in detail. So far, 389 large companies have undergone this test, including many world-renowned brands. In April 2018, the SBT confirmed the 100th of these plans. Companies from 23 countries are now pursuing science-based climate protection targets.

To be approved, interested parties must show that their goals correspond to the current state of research. They must also realize the minimum savings necessary (relative to their sector and size) to meet the global objectives of the Paris Agreement. The initiative is supported by the WWF, the UN Global Compact, the Carbon Disclosure Project and the World Resource Institute – an organization that has been dedicated to environmental protection and resource conservation for more than 30 years.

Symrise Exceeds Its Own Goals

Fifty-seven of the 103 companies verified so far are from Europe. Only a few German companies can be found on this list. Just twelve companies from Germany have submitted their plans to the initiative and only three of them have received confirmation that their goals meet the SBT’s strict requirements. Symrise AG’s goals were approved in July 2017 as the 61st company worldwide.
Symrise plans to reduce its own CO2 emissions by 18 percent by 2030. The calculation is based on the values from 2016. The obligation includes Scopes 1 and 2, i.e., the CO2 emissions generated within the company for energy production, as well as those resulting from the purchase of electricity. In addition, the company from Lower Saxony has pledged to ensuring that 80 percent of its suppliers commit to their own climate protection targets by 2020.

To achieve the targeted CO2 reduction, Symrise must reduce annual emissions by 5 percent in terms of value added. A much larger step was taken in 2017 – the company’s sustainability report shows a decrease of 7.8 percent. The next interim goal is to halve CO2 emissions in relation to value added by 2030, based on the figures from 2016.