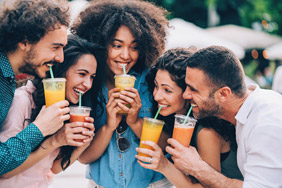 Compared to the rest of Europe, Germans attach particular importance to naturalness when buying food. Only taste and consumer friendliness are more important to German citizens. Consumers in France and the UK also pay particular attention to these two factors, followed by value for money and naturalness. In the future, the demand for natural foods could increase, especially in China. These are the results of six studies carried out by Symrise over the past two years. The Group surveyed around 15,000 consumers ages 16 to 70 from 12 countries in Europe, Asia, North America and Latin America.

The importance of naturalness differs greatly from country to country. At the same time, the researchers also identified overarching common aspects. They found that the explicit use of the word “natural” has a great influence on the perception and acceptance of a product or its ingredients. In addition, consumers around the world reject ingredients with scientific-sounding names because they do not perceive them as natural. In order for the consumer to understand and trust the content of the label, it needs concrete and transparent information. Another finding was that consumers prefer familiar methods of food preparation. Artificial sweeteners are also considered unhealthy and too sweet.

“Many consumers today want to buy the most natural food possible,” says Stefanie Hartwig, Global Marketing Engagement Manager at Symrise. “At Symrise, we respond to this preference with our code of nature® platform. This means that we value natural ingredients, gentle processing and authentic taste in our products.”

Especially in Europe, consumers are very interested in the ingredients of food. They thoroughly read even long lists of ingredients as long as they can understand them. In general, respondents attach importance to ingredients they know. On the other hand, they mostly reject unfamiliar ingredients. This also applies to very general disclosures such as the ones on vegetables. Concrete content information significantly improves acceptance. The disclosure of food additives in the form of E numbers, as practiced in the European Union, is also poorly received by consumers, especially in Germany.

In Asia, the proportion of consumers interested in natural foods varies relatively widely. While in Japan almost half of consumers prefer natural raw materials, in Thailand the proportion is about a third and in China about a quarter. China holds the greatest future potential. There are particularly good prospects in the yogurt drink and flavored water categories, if manufacturers simultaneously consider the need for health and safety.

“Natural foods offer an enormous growth market with great opportunities for manufacturers,” says Mathias vom Weg, SVP Global Purchasing Flavor at Symrise. “The challenge is to ensure naturalness throughout the value chain. We focus on transparency and traceability. With clear guidelines, we ensure that our suppliers meet our requirements for naturalness.”

Similar perception of naturalness in North America and Latin America

In the USA, consumers particularly expect naturalness in the yogurt (68 percent), soup (55 percent) and flavored water (50 percent) product categories. Respondents there primarily associate naturalness with the terms “fresh,” “natural,” “local ingredients” and “free of additives and preservatives.” This also applies to Latin America. Consumers there understand naturalness as describing a product that is real and pure without additives. Especially in beverages, Latin American consumers value natural taste, natural sweeteners and a healthy product.