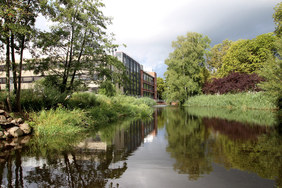 — Company contributes to limiting global temperature rise to 1.5 degrees Celsius
— Symrise pioneering as the first SBTi member in its industry

With its ambitious sustainability objectives, Symrise is making an important contribution to climate protection. The Science Based Targets Initiative (SBTi) has now scientifically tested and officially confirmed this performance: The Holzminden-based Group is helping to curb the global rise in temperature. Throughout Germany, Symrise belongs to one of the first three companies in this initiative and now meets the highest standard of SBTi. The audit team is backed by recognized organizations such as CDP, the United Nations Global Compact, the World Resources Institute (WRI) and the World Wide Fund For Nature (WWF).

Symrise is now again deemed compliant with the SBTi criteria. The initiative’s experts have determined that the company’s intentions meet the goal of limiting the human-induced global temperature increase due to the greenhouse effect to 1.5 degrees Celsius. SBTi mobilizes companies to set science-based goals in the transition to a low-carbon economy. By doing so, companies can both protect the climate and increase their own competitiveness. More than 2,500 companies worldwide have submitted their data and undergone rigorous review, and their number has risen sharply in recent years. The Holzminden-based company was pioneering: In June 2017, Symrise belonged to the world’s first 100 certified companies and the first company in its industry to set ambitious goals approved by the SBTi.

“We feel proud to stand up to the rigorous scrutiny of the Science Based Targets Initiative in all three target dimensions. We take it very seriously to do our part to protect the climate and limit the rise in global temperatures. After all, we supported as one of the first companies what has become a major initiative,” says Bernhard Kott, Chief Sustainability Officer at Symrise. “Our high standards ensure that we can operate climate-positive starting in 2030, particularly through increasing process and energy efficiency and specific certified climate protection projects.

After careful review, the SBTi has determined that the three goals submitted by Symrise meet all SBTi criteria in terms of time frame, emissions coverage and ambition and are covered by goals. Scope 1, 2 and 3 relate to defined Greenhouse Gas Protocol (GHG Protocol) standards for measuring and communicating greenhouse gas emissions and take the entire value chain into account. Scope 1 focuses on carbon emissions and Scope 2 on those of energy suppliers. Scope 3 covers the climate-damaging gases released in the upstream and downstream supply chain, for example when purchasing goods, raw materials and services.

Symrise has committed itself to reducing absolute greenhouse gas (GHG) emissions from Scopes 1 and 2 by 80 percent compared to 2020 by 2028. In addition, the Holzminden-based company agrees to reduce absolute Scope 3 by 30 percent by 2030 – also relative to the base year 2020. Symrise also committed to sourcing 100 percent of the electricity it needs from renewable sources worldwide. The company already achieved this goal in 2020.

“In addition, we have succeeded in reducing energy requirements for the production of raw materials and in plant logistics. To achieve this we have asked our suppliers to define their own energy and climate goals. Therefore, we now also fulfill the SBTi criteria for Scope 3,” adds Dr Helmut Frieden, Vice President Corporate Sustainability Symrise. The creation of raw materials accounts for around 92 percent of Scope 3 carbon emissions.