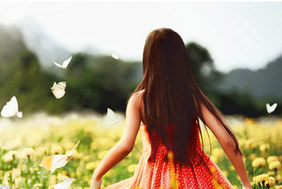 Following a dynamic start to the year, Symrise AG accelerated its organic growth course in the second quarter. All segments and regions contributed to this positive development. Group sales rose significantly by 9.0 % in the first half of 2018. Taking into account portfolio and exchange rate effects, sales grew by 4.0 % to € 1,575.5 million (H1 2017: € 1,515.3 million). Earnings before interest, taxes, depreciation and amortization (EBITDA) amounted to € 317.1 million (H1 2017: € 322.9 million). The EBITDA margin remained at a good level of 20.1 %. Against the background of this positive business performance, Symrise is refining its outlook for 2018: The Group now expects an increase in annual sales above the medium-term target corridor of 5 to 7 %, thereby growing significantly faster than the market.

“Symrise took advantage of the momentum in the second quarter and significantly expanded business in all segments. Our comprehensive backward integration is proving to be a great asset. Also with a shortage of certain key raw materials for fragrance compositions, we were able to supply our customers reliably,” said Dr. Heinz-Jürgen Bertram, CEO of Symrise AG. “We are moving into the second half of the year from a strong position. Targeted investments in research and development, sales strength and capacity expansions are driving our growth. Therefore, we are raising our sales forecast for the current fiscal year: We expect organic growth above our medium-term target corridor of 5 to 7 % and will therefore significantly exceed market growth.”

High demand in all segments and regions

In the first six months, Symrise AG increased its organic sales by a strong 9.0 %. The second quarter was particularly dynamic with double-digit sales of 10.6 %. Symrise is therefore once again one of the fastest-growing companies in the industry. All segments and regions contributed to this positive business performance. Considering portfolio effects, such as the contribution from the recently acquired companies Cobell and Citratus, and exchange rate effects, sales grew by 4.0 % to € 1,575.5 million (H1 2017: € 1,515.3 million). As in the previous quarter, sales trend in reporting currency was impacted by unfavorable exchange rates, in particular by the appreciation of the euro against the US dollar.

As before, Latin America was the key growth driver at the regional level. During the reporting period, the region recorded organic sales growth of 16.1 %. In the second quarter, growth reached even 20.2 %. The Asia/Pacific region sales grew by 12.3 % in the first half of the year, followed by EAME and North America with growth rates of 7.4 % and 5.2 %, respectively. In Emerging Markets, Symrise increased sales by 12.8 %. These markets, which are characterized by dynamic growth, contributed 43 % to total sales.

Cash flow from operating activities for the first half of 2018 of € 151.3 million was € 23.7 million lower than in the previous year (€ 175.0 million). The reason for the decline is an increase in working capital due to the high growth dynamics and the associated increase in inventories alongside higher raw material costs.

In a challenging environment, the Scent & Care segment achieved strong organic growth of 10.1 % in the first half of the year. In this continuing tense situation of the raw material markets, especially with the supply of important aromatic substances, the segment sustained the dynamic development from the previous quarter and grew by 13.6 % between April and June. Taking into account negative exchange rate effects and the portfolio effect from the acquisition of Citratus, the segment increased sales by 3.4 % to € 660.1 million (H1 2017: € 638.2 million).

The second quarter was also marked by failure to deliver raw materials of some suppliers and an overall rise in price level. Scent & Care again benefited from its comprehensive backward integration in fragrances – recently strengthened by the acquisition of Pinova in 2016 – and its mostly own broad raw material base. As in the previous quarter, Symrise was therefore fully capable of delivering to its clients. To compensate for the increased raw material costs, the company is in close dialogue with its customers to actively implement price increases.

Also in view of significantly higher raw material prices, which led to cost increases, the segment’s EBITDA of € 127.9 million was on prior-year level (H1 2017: € 128.4 million). Crucial when comparing with the reference period is that it included a one-off gain of € 4.7 million from the purchase price adjustment related to the sale of the Pinova industrial activities. The EBITDA margin of the segment was 19.4 % (H1 2017: 20.1 %). Adjusted for the one-off effect, the EBITDA margin for the same period in the prior year was 19.4 %.

Flavor achieved strong organic sales growth of 10.9 % in the reporting period. All regions and application areas significantly expanded their sales. The segment also benefited from new business with vanilla and the high price level of vanilla applications. Considering exchange rate effects and the Cobell acquisition, the segment’s sales grew by 9.0 % to € 604.7 million (H1 2017: € 554.8 million).

In the EAME region, the Flavor segment achieved double-digit organic growth rates. Significant growth impetus came mainly from applications for Sweets and for Savory in Western Europe and Russia.

The Asia/Pacific region recorded high single-digit, and for some areas even double-digit, growth rates across all application areas. The markets of China, India, South Korea and Singapore developed particularly well.

The North America region achieved double-digit organic sales growth rates as well and therefore also showed a very positive development. The first half of the year was particularly dynamic in the Beverages application area.

Nutrition generated organic growth of 3.6 % in the first six months. This figure reflects the temporarily destocking of one major customer of Probi. Adjusted for this effect, growth in the segment amounted to 7.6 %. Taking into account negative exchange rate effects, sales amounted to € 310.6 million (H1 2017: € 322.2 million). Order intake at Probi is expected to normalize in the second half of the year.

Based on the strong growth momentum of the first six months, Symrise is refining its sales guidance for the current fiscal year: For 2018, the Group expects to significantly exceed market growth, which is expected to range between 3 to 4 %. Symrise now expects sales growth of more than 7 %, and thus above the medium-term target corridor of 5 to 7 %.

In addition to good demand, the Group’s organic growth will accelerate primarily as a result of numerous investment projects to expand capacity. In August, for example, the capacity expansion for cosmetic ingredients will be successfully completed in South Carolina. Moreover, the new Diana Food Ingredients site in Georgia will start production in the fourth quarter.

Symrise also expects for the second half of the year that the continuing shortage of key raw materials for perfume compositions will not lead to any shortfalls in its supply. Nevertheless, as in the first half-year, higher purchase costs for raw materials are likely. Overall, the Company considers itself well positioned to compensate for market shortages on the basis of its own backward integration.

Symrise therefore intends to remain one of the most profitable companies in the industry in 2018 with an EBITDA margin of around 20 %.

The medium-term targets through to the end of the fiscal year 2020 remain in effect, including a compound annual growth rate (CAGR) in the 5–7 % range and an EBITDA margin between 19–22 %. 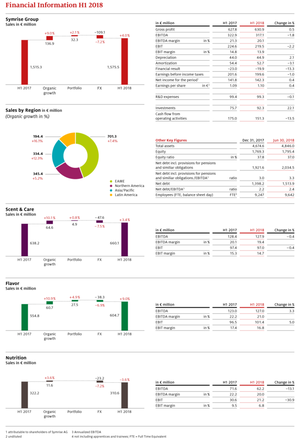