Symrise Achieves Record Levels in Sales and Profitability in 2013

Symrise AG continued its dynamic profitable growth course in 2013 and achieved new all-time highs in sales and earnings during its tenth anniversary year. The Group grew sales by 6 % to EUR 1,830 million (2012: EUR 1,735 million). In local currency, this corresponds to an increase of 10 %. Earnings before interest, taxes, depreciation and amortization (EBITDA) also rose considerably by 10 % to EUR 373 million (2012: EUR 339 million). With an EBITDA margin of 20.4 % (2012: 19.5 %), Symrise managed to further increase its profitability this past fiscal year. These excellent developments were supported by both divisions. Scent & Care performed particularly well, benefiting from a positive consumer sentiment worldwide, strong demand for menthol and the fragrance activities acquired from the Belmay Group. Symrise recorded the strongest growth at local currency in North and Latin America. The group also continued to grow in the Emerging Markets and increased sales at local currency by 11 % compared to the previous year.

Dr. Heinz-Jürgen Bertram, CEO of Symrise AG, said: “In the 2013 fiscal year, Symrise again clearly outperformed the global market for flavors and fragrances. We achieved new records in sales and earnings despite a very volatile economic climate. We particularly benefited from our expanded menthol activities and from high demand for flavors used in sweet and savory applications. Our expanded fragrance activities in the USA also made a significant contribution. Ten years after its founding, Symrise holds a leading position in all of its market segments. This is the result of our focused expansions, the diversification of our customer base and our innovative portfolio. Symrise is thus well-positioned to maintain its excellent growth and earnings trajectory as it opens the next chapter of its corporate development.”

Group Sales Up 10 % at Local Currency
Symrise grew Group sales in the 2013 fiscal year by 6 % to EUR 1,830 million (2012: EUR 1,735 million). At local currency, this corresponds to a 10 % increase. Symrise therefore successfully accomplished its goal of growing faster than the global market for flavors and fragrances. According to estimates, the market grows by 2 to 3 % per year.

EBITDA Increases 10 % to EUR 373 Million
Symrise once again demonstrated its high profitability in 2013: Despite strategic growth investments in research and development, new production capacities and additional sales units, the Group boosted its earnings before interest, taxes, depreciation and amortization (EBITDA) by 10 % to EUR 373 million (2012: EUR 339 million). The EBITDA margin increased from 19.5 % in the previous year to 20.4 % and therefore was within the targeted range of between 19 and 22 %.  Symrise was thus once again among the most profitable companies in the industry.

Cash Flow from Operating Activities Up 25 %
The Group’s good earnings performance had a positive impact on cash flow from operating activities: It increased by 25 % to EUR 274.8 million (2012: EUR 219.5 million).

The division expanded both, organically as well as through acquisitions and benefited from three factors: the high demand for perfumes, the fragrance activities acquired from Belmay and the menthol business.

Scent & Care’s strongest regional growth was posted in North America. Here, sales were up by 19 % at local currency – driven by high, double-digit growth rates in the Oral Care and Aroma Molecules application areas as well as by the business acquired from Belmay. The second-strongest region in the Scent & Care division was Asia/Pacific, which posted a sales increase of 14 % at local currency. This result was especially supported by business performance in China, India, Japan and Indonesia. Latin America also developed dynamically: The region increased its sales by 11 % at local currency and particularly benefited from high demand in the perfumes and cosmetics application areas. After the sales drop in the prior year, the EAME region showed a strong recovery in 2013 – recording a sales increase of 10 % at local currency. Along with the positive developments in Western Europe, the main contributors to this result were the recovery in Eastern Europe and strong growth in Africa and the Gulf region.

Flavor & Nutrition Division
Flavor & Nutrition increased sales by 2 % to EUR 870 million in 2013 (2012: EUR 852 million). Adjusted for exchange rate effects, this growth amounted to 6 %. Every application area contributed to this growth, with sweet and savory products making the strongest contributions, as well as the Consumer Health application area.

Latin America recorded the strongest sales increase for the division with sales up by 15 % at local currency. The region benefited from strong growth in all flavor application areas. The second-strongest region was Asia/Pacific, which posted 7 % sales growth at local currency. Here, Flavor & Nutrition expanded its business, especially with savory products as well as in the Consumer Health area. In North America, the division increased sales by 6 % and benefited from considerable new business with selected customers. In the EAME region, Flavor & Nutrition posted even stronger growth than in the previous year, up 5 % at local currency. This was mainly driven by higher demand from Eastern Europe, Africa and the Gulf region. The mixing plant that opened in Holzminden this past June also provided further capacities and contributed to the result.

Focus on Sustainable, Profitable Business
At the beginning of 2013, Symrise announced long-term targets for its business activities for the first time. The targets apply through the end of the 2020 fiscal year. The Group is aiming to increase sales by an average of 5 to 7 % annually (CAGR). In addition, Symrise is also striving to be among the most profitable companies in the industry. By the end of 2020, earnings before interest, taxes, depreciation and amortization (EBITDA) should amount to more than EUR 500 million. The EBITDA margin should be within the range of 19 to 22 %.

Symrise’s profitable growth course is based on three strategic pillars: The focused expansion of its business in established and particularly Emerging Markets, the constant improvement of its efficiency as well as innovations within the context of a diversified product portfolio. The Group links commercial success with sustainable business practices. Accordingly, Symrise aims to procure its most important natural raw materials from sustainable sources by 2020. Symrise also wants to further reduce its impact on the environment.

Above-Average Growth Targeted for Current Fiscal Year 2014
Symrise has entered fiscal year 2014 with positive economic expectations. The Group expects to grow in both divisions and to benefit from solid consumer demand. Although dynamics in some Emerging Markets have recently decreased to some extent, Symrise remains confident in its ability to also expand business in those markets in 2014. In addition, Symrise again anticipates solid results from the established markets. Accordingly, Symrise is expecting to grow as a Group and in both divisions faster than the international market for flavors and fragrances, which is projected to grow by between 2 to 3 %. With respect to cost development, Symrise anticipates continued volatility with raw material prices. Some currencies will also remain under pressure. Symrise nonetheless confirms its objectives to deliver profitable growth and to achieve an EBITDA margin of around 20 % in 2014. 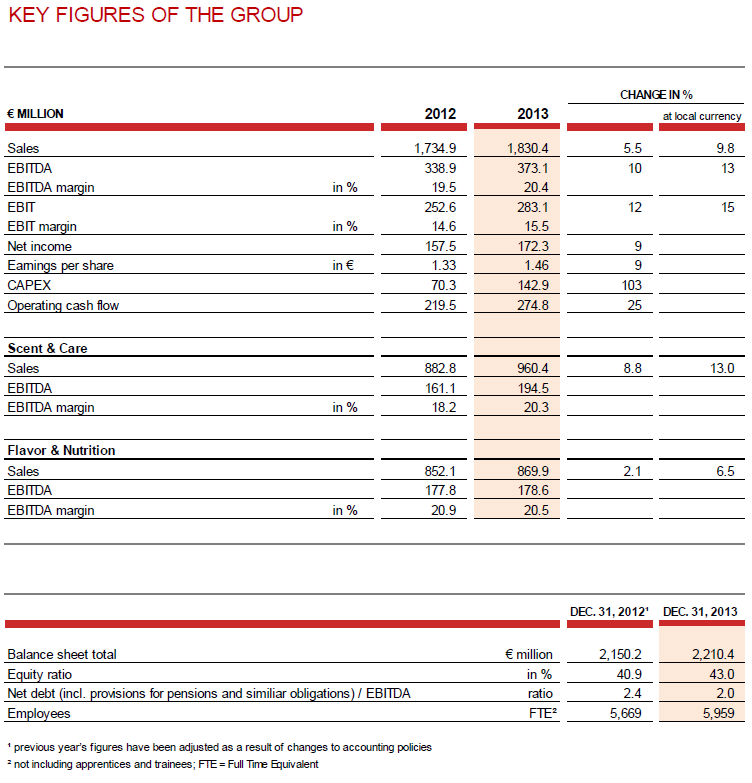 Image material from Symrise AG as well as the Executive Board members is available on the Company’s website: Newsroom/Press images

Symrise is a global supplier of fragrances, flavorings, cosmetic active ingredients and raw materials as well as functional ingredients. Its clients include manufacturers of perfumes, cosmetics, food and beverages, the pharmaceutical industry and producers of nutritional supplements.

Its sales of EUR 1.830 billion in 2013 place Symrise among the top four companies in the global flavors and fragrances market. Headquartered in Holzminden, Germany, the Group is represented in 35 countries in Europe, Africa, the Middle East, Asia, the United States and Latin America.

Symrise works with its clients to develop new ideas and market-ready concepts for products that form an indispensable part of everyday life. Economic success and corporate responsibility are inextricably linked as part of this process. Symrise thus takes sustainability into account in every part of its corporate strategy. The company was awarded the German Sustainability Award in 2012. In 2013, Symrise was certified as a “Green Company” by DQS. Symrise – always inspiring more…