Symrise achieves strong revenue growth of 7.4 % in the first half of the year 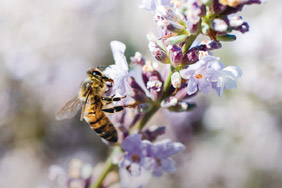 — Profitability at good level with an EBITDA(N) margin of 20.8 %
— Outlook 2019 specified: Normalized EBITDA margin expected to be around 21 %
— Growth target for the full year and long-term goals for 2025 confirmed

Symrise continued its dynamic business development in the first half of 2019. All segments benefited from higher customer demand and realized a pleasing increase in sales. Across the Group, Symrise increased organic sales in the first half of the year by 6.2 %. Accounting for currency translation effects, Group sales increased by an impressive 7.4 % to € 1,692 million (H1 2018: € 1,576 million). Earnings before interest, taxes, depreciation and amortization (EBITDA) amounted to € 342 million and therefore was up 7.7 % over the previous year’s level (H1 2018: € 317 million). Adjusted for the one-time effects related to the planned acquisition of ADF/IDF, EBITDA(N) amounted to € 351 million, exceeding the previous year’s figure by € 34 million. The profitability of the Group remained at a high level with an EBITDA(N) margin of 20.8 % (H1 2018: 20.1 %). As a result of the new IFRS 16  standard, EBITDA(N) increased by € 9.8 million in the first half of 2019. The normalized net income for the period of € 153 million exceeded the previous year’s level by 7.8 % (H1 2018: € 142 million).

“After a dynamic start to the year, we continued our growth and further expanded our business,” said the CEO of Symrise AG, Dr. Heinz-Jürgen Bertram. “All segments increased sales and contributed to the Group’s growth. This positive development is accompanied by continued good demand from our customers. That is why we are looking ahead to the coming months with confidence, even if the economic prospects are slowing down in some regions of the world. Symrise has proven in the past that our business remains very robust even in such times. We therefore stand by our annual goals as well as our long-term ambitions. These goals include annual organic sales growth of 5–7 % on average by 2025.”

Good demand in all segments

Symrise achieved dynamic organic sales growth of 6.2 % in the first half of 2019. All segments benefited from good demand. Including exchange rate effects, consolidated revenues increased by an impressive 7.4 %.

Scent & Care realized strong organic sales growth of 6.3 % in the first half of 2019. After a dynamic first quarter, the very positive sales performance continued in the second quarter. Taking currency translation effects into account, sales in the first six months were € 712 million, up 7.8 % over the same period of the previous year (H1 2018: € 660 million).

Sales in the Cosmetic Ingredients division grew by a single-digit percentage, driven by the North America and Asia/Pacific regions. The national markets in the USA and China developed particularly dynamically.

In the first half of 2019, Flavor achieved organic sales growth of 3.7 % over very high comparable figures from the previous year. The Savory business unit and the Asia/Pacific and EAME regions significantly increased sales. In the Sweet business unit, the increase in sales was modest after the high level of momentum in the previous year. Accounting for currency translation effects, the segment’s sales in the reporting currency grew by 5.4 % to € 637 million (H1 2018: € 605 million).

In North America, sales growth was in the single digits. In particular, the savory products application area developed positively.

The EBITDA of the Flavor segment amounted to € 144 million in the reporting period (H1 2018: € 127 million), and grew 13.6 % compared to the prior year’s figure. The EBITDA margin improved from 21.0 % in the first half of the previous year to 22.6 % in the current fiscal year. This was mainly due to proportionally lower raw material costs.

Nutrition achieved strong organic growth of 11 % in the first half of 2019. Accounting for currency translation effects, sales in the reporting currency amounted to € 343 million and were 10.5 % above the previous year’s level (H1 2018: € 311 million).

In the Food business unit, the regions of Asia/Pacific and Latin America posted double-digit growth, especially in China, Australia and Mexico. Sales in the EAME and North America regions fell slightly.

The Nutrition segment generated an EBITDA(N) of € 67 million in the first half of 2019 (H1 2018 EBITDA: € 62 million). The segment’s EBITDA(N) margin reached 19.5 %, which was below the prior-year period (H1 2018 EBITDA margin: 20.0 %). The slight decrease in margin was mainly due to production delays at Diana Food’s new site in North America and increased raw material costs at Diana Pet Food.

As part of the planned acquisition of ADF/IDF, acquisition costs of € 9.6 million were incurred in the first half of 2019. Symrise is therefore using normalized results (EBIT(N) / EBITDA(N)) adjusted for these one-off, non-recurring specific influences.

In the first six months of 2019, the Group generated normalized earnings before interest, taxes, depreciation and amortization (EBITDA(N)) of € 351 million. The EBITDA(N) thus increased by 10.8 % compared to the same period of the previous year. The main driver of this development was profitable sales growth.

Net income for the period and earnings per share

At € 141 million, cash flow from operating activities for the first half of 2019 was € 10 million lower than in the previous year (€ 151 million). The main reasons for this were an increase in working capital (in particular due to period-related lower trade payables) and higher tax payments in the reporting period, which more than offset the higher profits and lower capital expenditures than in the same period of the previous year.

Net debt decreased by € 207 million to € 1,173 million compared to the reporting date of 31 December 2018. This was mainly due to the capital increase carried out in March and the effects of the application of IFRS 16. The ratio of net debt to EBITDA(N) thus amounted to 1.8. Including pension obligations, net debt equaled € 1,780 million, which corresponds to a ratio of net debt (including provisions for pensions and similar obligations) to EBITDA of 2.7. Pension obligations in the Group increased by € 93 million, due to a significant decline in interest rates in Germany.

Following the dynamic business development in the first six months, Symrise continues to expect sales growth of 5 to 7 % for the current fiscal year. The target is once again to significantly exceed the growth of the relevant market in 2019, which is estimated to grow by 3 to 4 % worldwide. In addition, Symrise is now targeting an EBITDA(N) margin of around 21 % (including IFRS 16) despite the expected economic slowdown, persistently volatile exchange rates and tight raw material prices.

Overall, the Group is very well positioned to achieve its targets with its global presence, diverse portfolio and broad customer base. Against the background of rising demand for important raw materials, the expansion of our own backward integration will continue to play an important role.

At the beginning of the year, Symrise presented its long-term targets. They underpin the company’s ambitions and now extend to the end of fiscal year 2025. Symrise intends to increase sales to about € 5.5 to 6.0 billion by then. This increase is to be achieved through annual organic growth of 5 to 7 % (CAGR) as well as additional targeted acquisitions. 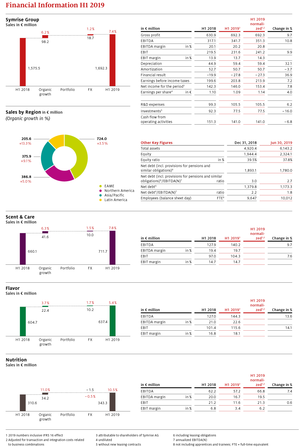