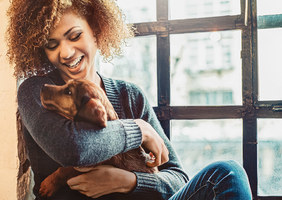 — Sales increase of 9.7 % in organic terms
— High level of profitability with EBITDA margin of 22.0 %
— Targets for 2021 raised: Sales are projected to grow organically by more than 7 %, EBITDA margin forecast to be over 21 %

In the first half year of 2021, Symrise AG has performed outstandingly well. In spite of the ongoing coronavirus pandemic across the world, the company’s sales and earnings increased substantially. Organic sales growth amounted to 9.7 %. In the reporting currency – without portfolio and currency translation effects – sales increased by 4.8 % to € 1,908 million (H1 2020: € 1,821 million). Earnings before interest, taxes, depreciation and amortization (EBITDA) rose by 6.8 % to € 420 million compared to the same period of the previous year. The EBITDA margin developed particularly well with a value of 22.0 % (H1 2020: 21.6 %). Net income for the period increased by 15.9 % to € 196 million. Against the background of the good performances during the first half of the year, Symrise raised the forecast for the full year and is targeting organic sales growth of more than 7 % (previously 5 to 7 %) and an EBITDA margin of more than 21 % (previously around 21 %).

“The progress made in combatting the worldwide coronavirus pandemic had a positive impact on our business during the second quarter. Demand increased significantly in many areas. In particular there was strong demand for cosmetics and fine fragrance applications again. Product solutions for beverages and food also developed very dynamically because falling case numbers for the coronavirus fueled out-of-home consumption,” commented Dr. Heinz-Jürgen Bertram, CEO of Symrise AG. “Although the pandemic will persist, we are very confident for the coming months following the good first half of the year, and we are more confident about our performance in the future. We are therefore raising our forecast for the organic sales target, as well as for the profitability target.”

Strong growth in the Group and the segments

In the reporting currency, the Symrise Group achieved sales growth of 4.8 % to € 1,908 million (H1 2020: € 1,821 million). The acquisition of the Fragrance and Aroma Chemicals business from the US company Sensient in April 2021 contributed € 14.4 million. In spite of the weaker prior-year figures due to the pandemic, organic sales growth was even stronger: During the first six months, Symrise increased sales by 9.7 %. Alongside catch-up effects in the first quarter resulting from the cyber-attack in December, the good dynamic in the second quarter made a contribution. Due to the accelerating business and higher demand, sales increased organically between April and June by 8.8 %.

As of 1 April 2021, Symrise AG modified segment reporting and from now on will publish earnings figures for the two segments Scent & Care and Flavor & Nutrition. As part of a strategic realignment, the previously separate segments Flavor and Nutrition have now been combined in the segment Flavor & Nutrition. Activities for beverages and food, as well as the applications for pet food and probiotics are now grouped in this segment. The combination will allow a more targeted response to customer needs as well as the expansion of customer relationships. Furthermore, processes will be optimized by pooling competences and technologies.

Scent & Care, the business with fragrances, aroma molecules and cosmetic ingredients, achieved very good organic sales growth of 9.0 % in the first half year of 2021. Taking currency translation effects into account, sales amounted to € 749 million in the first six months and rose significantly compared to the prior-year period (H1 2020: € 711 million). The Fragrance and Aroma Chemicals business from Sensient contributed € 14.4 million to this. Particularly during the second quarter, normalization of consumer demand began to emerge as battling the pandemic progressed. Sales in the Fine Fragrances business unit and Cosmetic Ingredients division increased strongly.

The Fragrance division achieved overall organic growth in the double-digit percentage range. Demand in the Fine Fragrances business unit recovered in virtually all regions. Sales even partly exceeded the level prior to the coronavirus. The Consumer Fragrance and Oral Care business units in each case delivered high single-digit organic growth in spite of exceptionally high prior-year sales.

Sales in the Aroma Molecules division were at the prior-year level. The significant growth in the Menthols business unit was able to almost entirely compensate the lower demand for aroma molecules and the fall in their market prices.

The Cosmetic Ingredients division benefited from the increasing demand for luxury bodycare products and cosmetics, and achieved a double-digit increase in sales. The overall demand for sun protection products continued to remain behind the prior year, although an increase in travel activity has started to take hold since the second quarter.

The combined Flavor & Nutrition segment increased its sales organically by 10.1 %. Sales in the reporting currency increased to € 1,159 million and thereby significantly exceeded the prior-year figure (H1 2020: € 1,110 million). In the second quarter, the segment recorded gradual normalization of consumer behavior. The increase in out-of-home consumption exerted a positive effect on demand for beverage products. At the same time, the trend towards healthy cooking at home and the continuing high demand in pet food solutions ensured strong growth.

Applications for beverages recorded very good organic sales growth in the double-digit percentage range. The biggest growth was generated in the US market, China, Brazil as well as Germany, the United Kingdom and Ireland. Sales in the Savory business unit primarily increased in the national markets of South Africa, Egypt, Mexico and Brazil. They made a significant contribution to exceeding the prior-year figures, which were already strong.

The Pet Food business unit continued the strong development from the prior year and achieved organic growth in the double-digit percentage range. Sales development in Mexico, Argentina, China and Southeast Asia was especially dynamic.

The Food business unit benefited from the recovery in demand in many markets, particularly in Western Europe. Organically, the business unit achieved pleasing growth.

Sales development in the Aqua business unit was influenced by the continuing low demand for feed solutions in aquaculture.

ADF/IDF developed very well and generated organic growth in the double-digit percentage range. Growth was primarily driven by synergy effects in the Group and good growth in the Food and Pet Food business units in the American domestic market.

In the first half year of 2021, Symrise operated highly profitable despite the continued challenging economic environment resulting from the global pandemic. The Group generated earnings before interest, taxes, depreciation and amortization (EBITDA) of € 420 million. This corresponds to an increase of 6.8 %, which is primarily driven by the profitable sales growth and sustained strict cost management, as well as a positive one-off effect in the amount of € 13.2 million from the acquisition of the Fragrance and Aroma Chemicals business from Sensient. The EBITDA margin increased by 0.4 percentage points to an outstanding 22.0 % (EBITDA H1 2020: 21.6 %).

Net income for the period and earnings per share

Operating cash flow at € 136 million was € 83 million below the prior-year figure of € 219 million. This is essentially due to increased trade receivables and higher tax payments. The business free cash flow amounted to € 181 million (H1 2020: € 191 million) for the first six months of the current fiscal year.

At the beginning of May, Symrise successfully refinanced the existing Revolving Credit Facility of € 300 million from the year 2015. The new Revolving Credit Facility with a volume of € 500 million and a three-year term is linked to indicators based on sustainability. Metrics include further reduction of greenhouse gas emissions, strengthening responsible procurement processes and efficient water consumption.

Raising the forecast for 2021

On the basis of its global presence, the continually growing, diversified portfolio and its broad customer base, Symrise continues to see itself as being robustly and reliably positioned despite the currently challenging market environment that continues to be defined by the coronavirus pandemic. The Group is fully operational worldwide and is able to supply customers sustainably.

The change in consumer behavior resulting from the pandemic, which partly led to a shift in demand, is currently normalizing. In particular, demand for the applications for luxury products and product solutions for out-of-home consumption is rising again and supporting the growth trajectory of the Group. Based on the very good development in the first half year, Symrise is looking ahead with confidence to the second half of the year 2021 even though it is likely that the framework conditions imposed by the pandemic will continue to prevail almost unchanged. Symrise is raising the targets defined for the fiscal year 2021: Organic sales growth is projected to increase to above 7 % instead of the previous forecast of 5 to 7 %. The targeted EBITDA margin is now forecasted at above 21 % instead of around 21 %.

The medium-term targets continue to be unchanged. The company is targeting its sales increase to a corridor between € 5.5 and € 6.0 billion by 2025. Symrise intends to achieve this increase by average annual organic growth of 5 to 7 % (CAGR) and complementary strategic acquisitions. Profitability is projected in a target corridor of 20 to 23 % over the long term. 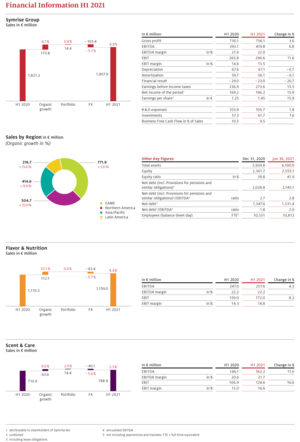