Symrise achieves strong sales growth in the first half of 2022 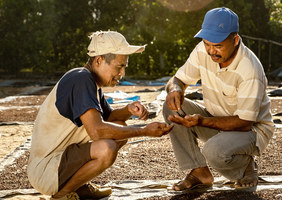 Symrise AG continues its growth course in the first half of 2022. The company saw a strong increase in sales and profit. Organic sales growth came to 10.2 %. Taking portfolio and exchange rate effects into account, sales in the reporting currency increased by 18.5 % to € 2,260 million (H1 2021: € 1,908 million). Earnings before interest, taxes, depreciation, and amortization (EBITDA) increased by 15.7 % to € 486 million compared to the same period in the previous year. The Group’s profitability reached a good level of 21.5 %, slightly below the previous year’s figure of 22.0 % mainly due to higher raw material and operating costs. At € 229 million, net income for the first six months exceeded the previous year’s figure of € 196 million by 16.6 %. In light of its solid performance in the first half of the year, Symrise is raising its forecast for the year as a whole and is now targeting organic sales growth of significantly above 7 % (previously 5 to 7 %) and an EBITDA margin of around 21 %.

“In a volatile business environment caused by rising commodity prices, ongoing global supply bottlenecks and the Russia-Ukraine war, we managed to continue on our profitable growth course. We achieved this by relying on our robust business model, diversified application portfolio and broad regional presence and customer base. Demand increased significantly in many areas. Customers have particularly increased their demand for applications for cosmetics, fine fragrances and pet food. Solutions for beverages and food have also performed very well and considerably contributed to the double-digit organic growth,” says Dr. Heinz-Jürgen Bertram, Chief Executive Officer of Symrise AG. “In light of the dynamic business development, we have raised our sales forecast and are now targeting organic sales growth of significantly above 7 % for the current fiscal year. While commodity and energy prices continue to increase, we want to maintain profitability at a high level with an EBITDA margin of around 21 %.”

Growth in the Group

The Symrise Group achieved sales growth of 18.5 % in the first half of 2022. The acquisition of the Fragrance and Aroma Chemicals business of Sensient, the acquisitions of Giraffe, Schaffelaarbos, Groupe Néroli and Romani, and the sale of the Velcorin and color business exerted a positive impact on sales development totaling € 59 million. Excluding portfolio and exchange rate effects, organic sales growth amounted to 10.2 %.

Taste, Nutrition & Health achieved organic sales growth of 12.7 % in the first half of 2022. Taking into account portfolio and exchange rate effects, the segment’s sales amounted to € 1,398 million in the reporting currency and thus exceeded previous year’s figure (H1 2021: € 1,159 million) by 20.6 %. The positive net effect of the acquisitions of Giraffe and Schaffelaarbos and the divestments of the Velcorin and color businesses totaled around € 34 million.

Symrise AG acquired Schaffelaarbos B.V. in January 2022. Schaffelaarbos is based in the Netherlands (Barneveld) and is a leading supplier of sustainably sourced proteins from eggs for the feed industry in the EU. With this transaction, Symrise has taken an important strategic step to further accelerate its international expansion in the pet nutrition segment. Symrise will combine and complement its current ADF/IsoNova operations in the USA with the modern Schaffelaarbos facilities in Barneveld.

EBITDA for the Taste, Nutrition & Health segment amounted to € 315 million in the reporting period (H1 2021: € 258 million) and thus increased by 22.2 % compared to the same period of the previous year. The increase related to profitable sales growth, the acquisitions made and a positive one-time effect from the sale of the Velcorin business. At 22.5 %, the EBITDA margin was slightly higher than the previous year’s value of 22.2 %. The above-mentioned one-time effect offset the rising raw material and operating costs. Without the one-time effect, the EBITDA margin would have been 21.2 %.

Scent & Care achieved organic growth of 6.3 % in the first half of 2022. Taking into account portfolio and exchange rate effects, sales in the first half of 2022 amounted to € 863 million in the reporting currency, 15.2 % higher than in the same period of the previous year (H1 2021: € 749 million). The takeover of the Fragrance and Aroma Chemicals business of Sensient and the acquisitions of Groupe Néroli and Romani contributed a total of around € 26 million to the segment’s sales.

The Fragrance division increased its sales by a single-digit percentage in the first half of 2022. The Fine Fragrances business unit continued to develop particularly dynamically, once again achieving double-digit percentage organic growth following a strong previous year. The recent acquisitions also contributed to the growth of the business unit, resulting in significant overall double-digit percentage sales growth. The growth rates were particularly pronounced in the EAME and Latin America regions. In the Consumer Fragrance business unit, demand for hygiene and cleaning products remained lower than in the previous year. By contrast, product solutions for household products developed positively. Sales development in the Oral Care business unit turned out subdued. The EAME region failed to match the good level of the previous year.

Sales in the Cosmetic Ingredients division developed very well in the first six months of the current year, with organic growth in the double-digit percentage range. All regions posted significant increases in sales, led by EAME (Europe, Africa, Middle East) and Latin America. The business unit for sun protection products continued to develop very dynamic due to the international increase in travel and the return to increased leisure activities.

The consequences of the coronavirus pandemic and the war in Ukraine have so far impacted the business development of Symrise only to a minor degree. The disruption of supply chains and the availability of raw materials have exerted a noticeable impact on the procurement markets and have led to price increases for raw materials, some of which at a significant level. The sharp rise in inflation in recent months has led to further cost increases at Symrise. The company is countering this development by consistently increasing prices for its own customers.

In the first six months of 2022, the Group generated earnings before interest, taxes, depreciation and amortization (EBITDA) of € 486 million. Compared to the same period of the previous year, this constitutes an increase of 15.7 %, driven by both profitable sales growth and the portfolio effects. At 21.5 %, the EBITDA margin fell 0.5 percentage points below the same period of the previous year, mainly as a result of increased raw material costs and higher operating costs (EBITDA margin H1 2021: 22.0 %). Earnings before interest and taxes (EBIT) increased by 16.0 %, from € 297 million to € 344 million.

The consolidated net income for the period attributable to shareholders of Symrise AG for the first six months of 2022 amounted to € 229 million, which was € 33 million higher than the amount of the previous year, € 196 million. Earnings per share rose by 13 % to € 1.64, up from € 1.45 in the first half of the previous year.

Forecast raised for the 2022 fiscal year

Also, with the current volatile market environment as a result of the Russia-Ukraine war, rising raw material prices and ongoing global supply bottlenecks, Symrise considers itself well positioned to continue on its profitable growth path. The company relies on its robust business model, diversified application portfolio and broad regional presence and customer base.

Symrise therefore reaffirms its growth and profitability targets and continues to expect to grow faster than the relevant market. The company is targeting organic sales growth of significantly above 7 % in 2022. Profitability will remain at a high level with an EBITDA margin of around 21 %.

Symrise is focusing on organic as well as inorganic growth, including the acquisitions of the Canadian company Giraffe in December 2021, the Dutch company Schaffelaarbos in January 2022, French companies Groupe Néroli and Romani in April 2022, and the Chinese company Wing Pet Food in July 2022. Moreover, Symrise will maintain its strict cost awareness and consistently pursue holistic sustainability management in all areas of the company.

In the medium term, the company aims to increase its sales to € 5.5 to 6.0 billion by 2025. Annual growth of 5 to 7 % (CAGR) as well as targeted acquisitions are expected to contribute to this. Profitability (EBITDA margin) should remain within a target corridor of 20 to 23 % in the long term. 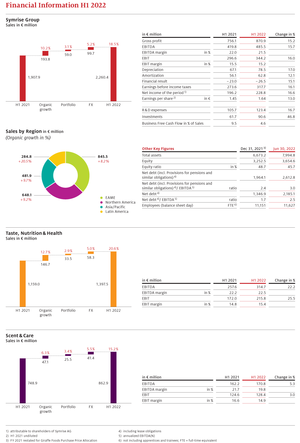