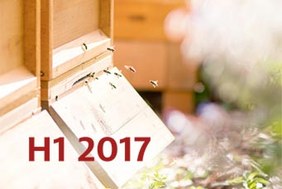 Symrise AG remained on track for strong growth in the first half of the current fiscal year. The Group increased sales in all segments and regions and was once again among the fastest-growing companies in the industry. Sales were up 3.6 % in the first half of the year to € 1,515.3 million (H1 2016: € 1,462.5 million). After adjustment for portfolio and exchange rate effects, the organic growth in sales actually amounted to 5.2 %. Earnings before interest, taxes, depreciation and amortization (EBITDA), at € 322.9 million, was at the same level as in the first half of 2016. With an EBITDA margin of 21.3 %, Symrise remains highly profitable. Against the backdrop of the very satisfactory business performance, Symrise is raising its full-year EBITDA margin guidance, and now expects the EBITDA margin in 2017 to exceed 20 %.

"The strong growth results from our unique positioning," said Dr. Heinz-Jürgen Bertram, CEO of Symrise AG. “The targeted and continuous investments in our competencies and capacity are paying off. We see this as a confirmation of our strategy. With the recent acquisition of Cobell, we are strengthening our position in the lucrative UK beverage market, which promises additional sales potential for our innovative applications. We are in an excellent position to meet the rising demand for our products and to stay on track for growth in the second half of this year. Our goals are unchanged: We want to remain one of the fastest-growing companies in the industry and to operate highly profitable."

For the first half of the year, Symrise increased its sales by 3.6 % to € 1,515.3 million (H1 2016: € 1,462.5 million). Adjusted for portfolio and exchange rate effects, the Group achieved organic growth of 5.2 %, which again placed Symrise among the fastest-growing companies in the industry. This strong performance was carried by all segments and regions.

At the regional level, strong contributions to sales growth came from Latin America and EAME, with increases of 12 % and 4 % (at reporting currency), followed by North America with 2 % and Asia/Pacific with 1 %. Sales in Emerging Markets were 5 % higher in the period under review and accounted for 43 % of overall sales.

Symrise used the strong market environment in the first half of the year to issue a seven-year € 400 million convertible bond in June 2017. The aim of the transaction was to secure long-term funding through the capital market on favorable terms and to further diversify the investor base. The net proceeds will be used to pay down existing loans and capital market liabilities and for general business purposes of the Group.

Scent & Care recorded sales of € 638.2 million in the first half of the year (H1 2016: € 667.8 million). The slight decrease was due to the strong sales in the previous year and the sale of Pinova's industrial activities at the end of 2016. Adjusted for the Pinova portfolio effect, the segment achieved an organic growth of 1.1 %, with good dynamics in Fine Fragrances and Cosmetic Ingredients.

The loss of the sales from the Pinova industrial activities and weaker demand for Beauty Care applications also impacted the EBITDA in the first half. EBITDA during the reporting period amounted to € 128.4 million, as compared to a normalized figure of € 140.1 million in the first half of 2016. The EBITDA margin stood at a level of 20.1 % (EBITDAN margin H1 2016: 21.0 %).

The Flavor segment delivered a very satisfactory sales increase of 7.2 % in the period under review to € 554.8 million (H1 2016: € 517.8 million) in reporting currency. The organic growth, to which all application areas contributed, actually amounted to 8.6 %. The growth was driven mainly by strong demand for sweets and new businesses in beverages. There was also an increase in order intake for savory applications, especially in Western Europe and North Africa.

Within the scope of its strategy of continued portfolio expansion, Symrise signed a purchase agreement with the shareholders of the British company Cobell Limited in May 2017. Cobell, which was established in 1999, is a supplier of natural raw materials and juice bases for the beverage industry in the UK. The company generated in 2016 annual sales of around € 58 million. The acquisition reaffirms Symrise's goal of reinforcing its strong position in the British beverage market. Cobell complements the Group's current business activities in the UK, expands its local presence and creates closer proximity to key customers.

Nutrition was also a fast growing segment in the first half of the year. The segment seamlessly continued its dynamic growth course from the previous quarter, with sales up by 16.3 % to € 322.2 million (H1 2016: € 277.0 million). Adjusted for currency and acquisition effects (acquisition of Nutra Canada and Nutraceutix), organic growth amounted to a high growth of 8.6 %. This result was bolstered by pet food applications which showed double-digit growth in almost all core markets. Substantial gains were also posted in food ingredients, especially in North and South America.

After the strong first half and a good start in the third quarter, Symrise is looking ahead to the remaining months of the year with confidence. Despite the political unrest and economic uncertainties in some countries, the Group expects demand and growth to be generally strong. Against this backdrop, and in view of the recent investment projects, Symrise is increasing its guidance for the EBITDA margin for the fiscal year 2017, and now expects to achieve a margin of over 20 %. In addition, the Company is confirming its goal of once again exceeding the growth rate of the global flavor and fragrances market. According to estimates, the global market is growing at an average annual rate of around 3 %. The medium-term targets remain in effect, including a compound annual growth rate (CAGR) in the 5-7% range and an EBITDA margin of 19-22%.

With sales of more than € 2.9 billion in 2016, Symrise is among the global leaders in the market for flavors and fragrances. Headquartered in Holzminden, Germany, the Group is represented with over 90 sites in Europe, Africa and the Middle East, Asia, the United States and Latin America.

Symrise works with its clients to develop new ideas and market-ready concepts for products that form an indispensable part of everyday life. Economic success and corporate responsibility are inextricably linked as part of this process. Symrise – always inspiring more…