— Strong organic sales growth of 8.8 %
— Group sales including acquisitions up 10.3 %
— EBITDA margin at a healthy 20.0 %
— Entering the age of digital perfume creation with Artificial Intelligence
— Symrise increases targets for 2018 again: organic growth of more than 8 % expected

Following a very dynamic first half of the year, Symrise AG successfully continued its growth course in the third quarter. All segments and regions contributed to this positive trend. The Group achieved an organic sales increase of 8.8 % in the first nine months of the year. Taking portfolio and exchange rate effects into account, sales in reporting currency were up 4.6 % to € 2,382.6 million (9M 2017: € 2,278.4 million). Earnings before interest, taxes, depreciation and amortization (EBITDA) amounted to € 475.7 million (9M 2017: € 485.2 million). The EBITDA margin remained at a good level of 20.0 %. Based on the positive nine-month development, Symrise raises its sales objective, which had already been increased at mid-year. Symrise aims at outperforming market growth and at achieving organic sales growth of more than 8 % in Fiscal Year 2018.

"Symrise held its course extremely well in the third quarter, despite the headwinds from volatile exchange rates, raw material shortages and increased raw material prices. We fully utilized growth opportunities and reliably supplied our customers. Based on our strong nine-month performance we are optimistic for the remaining weeks of the year and raise our sales guidance. We are committed to making 2018 yet another successful year for Symrise and its customers and will work with full dedication during the remaining weeks. Moreover, we are already laying the foundation for our future growth and are consistently implementing our investment programs. After putting additional capacity for Cosmetic Ingredients into operation in the USA, we have just a few days ago opened a new production facility for natural Food Ingredients. We will continue to manufacture our products close to our customers which allows us to maintain a direct presence in key customer markets and to make best possible use of growth opportunities," said Dr. Heinz-Jürgen Bertram, CEO of Symrise AG.

In the first nine months of the year, Symrise increased its sales in local currency by 10.3 %. Organic growth (excluding acquisitions) amounted to 8.8 %. Considering portfolio effects, such as the contribution from the recently acquired companies Cobell and Citratus, and exchange rate effects, sales grew by 4.6 % to € 2,382.6 million (9M 2017: € 2,278.4 million). Symrise was thus once again one of the fastest-growing companies in the industry. All segments and regions experienced strong demand and contributed to the positive business performance. As in the first six months of the year, the sales trend in reporting currency was impacted by unfavorable exchange rates, in particular by the appreciation of the euro against the US dollar.

As before, Latin America was the key growth driver at the regional level, with organic sales growth of 19.2 %. In the third quarter, the region increased sales by even 25.2 %. In the Asia/Pacific region, sales grew by 12.9 % in the first nine months, followed by North America and EAME with growth rates of 5.7 % and 5.5 %, respectively. In Emerging Markets, sales increased by 12.8 %. These markets, which are characterized by dynamic growth, contributed 43 % to total sales.

Profitability at a good level despite challenging environment

In the first nine months of 2018, Symrise generated earnings before interest, taxes, depreciation and amortization (EBITDA) of € 475.7 million (9M 2017: € 485.2 million). This result is impacted by increased expenditures for strategic growth projects such as the new Diana site in Georgia. Additionally, significantly higher costs for key raw materials and unfavorable exchange rate effects impacted profitability. Moreover, the result reflects a one-off effect: The production of menthol and cosmetic ingredients at the US-site in Charleston, South Carolina had to be temporarily suspended due to Hurricane Florence. Despite the challenging environment, Symrise operated with good profitability and delivered an EBITDA margin of 20.0 % which is well within the medium-term target corridor of 19 to 22 % (9M 2017: 21.3 %).

The Scent & Care segment, which includes applications for fragrances and cosmetic ingredients, achieved a high 9.2 % organic sales increase in the reporting period. Even with the continuing tense situation of the raw material markets, especially with the supply of important fragrance substances, the segment sustained its dynamic development of the first six months. Sales in Scent & Care were up 7.4 % in the third quarter as compared to the strong Q3 figures of the previous year. Taking into account negative exchange rate effects and the portfolio effect from the acquisition of Citratus, the segment posted a 4.0 % sales increase to € 998.6 million (9M 2017: € 960.1 million) in reporting currency for the nine-month period.

Symrise has seen the strongest growth in the Cosmetic Ingredients and Aroma Molecules divisions, which both reported double-digit organic growth. In the Cosmetic Ingredients division, demand was strong above all in the Latin America and Asia/Pacific regions. Sales were up significantly, especially in Brazil, Argentina and Mexico as well as China and India. The Aroma Molecules division achieved strong increases in the high single-digit or even double-digit percentage range in all regions, with strong impetus coming especially from the Fragrance Ingredients application area.

The Fragrance division also performed well and posted high single-digit increases. The failure of important suppliers to deliver fragrance raw materials – a situation, which began already in the first half of the year – and the overall rise in price levels for raw materials impacted the third quarter as well. Scent & Care benefited from its comprehensive backward integration and did not experience any supply disruption. After the price increases already implemented in the previous quarters, Symrise continued to engage in close customer dialogues in the third quarter regarding the pass-on of price increases. The continuing trend of rising raw material costs will require further price adjustments and Symrise will therefore continue talks with its customers.

At the same time, the Group is driving forward research and development. In partnership with IBM Research, Symrise has developed a method to create perfumes based on digital fragrance models supported by Artificial Intelligence. The project combines human expertise with computer intelligence to compose novel scents. The first fragrances created with this new, data-based approach will be brought to market in 2019.

The Flavor segment, which includes taste applications, achieved organic growth of 10.2 % in the first nine months. With exchange rate effects and the acquisition of Cobell taken into account, the segment experienced 8.3 % growth in reporting currency in the period under review and sales of € 912.5 million (9M 2017: € 842.6 million).

The Latin America region achieved the strongest organic growth, with sales increases well within the double-digit percentage range over the course of the year. This strong development was supported in particular by new business wins with global customers in the beverages application business. Significant contributions came especially from Uruguay, Brazil and Mexico. The North America region benefited from strong demand for flavorings for the beverage industry. The EAME region showed a very positive development as well. Growth impetus was delivered by Western Europe and Russia, where demand was strong, especially for applications in sweet and dairy products. The Asia/Pacific region showed a very dynamic trend as well, delivering double-digit organic growth in all application areas. Strong yearon- year sales increases were seen especially in China, India and Vietnam.

The earnings situation in the Flavor segment was affected by the overall rise in raw material costs. In addition, the lower margin of Cobell had an impact. Nevertheless, the segment increased the EBITDA by € 3.6 million to € 187,0 million (9M 2017: € 183.4 million). The EBITDA margin stood at a solid 20.5 % (9M 2017: 21.8 %). As in the previous months, the segment Flavor remains also engaged in close dialogues with its customers regarding the pass-on of price increases.

The Nutrition segment, which includes the Diana division with applications for food, pet food and baby food as well as probiotics, achieved organic growth of 5.7 % in the first nine months. In the third quarter, organic growth in sales reached even 10.0 %. Taking into account exchange rate effects, the segment achieved sales of € 471.4 million in reporting currency after € 475.7 million in the prior year period. The slight decline reflects the announced destocking by a major customer of Probi in the first half of the year. In the third quarter, the order intake for probiotics normalized to a large extent.

Nutrition generated an EBITDA of € 96.9 million in the reporting period (9M 2017: € 105.6 million). The temporary decline mainly reflects the lower sales contribution from Probi in the first six months and ramp-up costs for the new Diana site in the USA. Despite these one-off effects, the EBITDA margin stood at a good 20.5 % (9M 2017: 22.2 %).

Against the background of the strong development in the first nine months and a promising start into the fourth quarter, Symrise is optimistic for the remaining weeks of the current fiscal year. The Group once 4 more increases its 2018 sales target which had already been raised in August. For the Fiscal Year 2018, Symrise now expects an organic sales increase of more than 8 %. With this growth rate Symrise would again significantly outperform the market which is expected to grow between 3 to 4 %.

In addition to ongoing strong demand Symrise expects growth to be driven by the various investments in capacity expansions and the enhancement of innovation.

The Group expects the shortage of raw materials to persist in the remaining weeks of 2018. Symrise considers itself well positioned to compensate for the market shortages on the basis of its own backward integration. The Group will prevent non-delivery of supplies through access to its own sources of key raw materials. Nevertheless, Symrise expects the purchase costs for raw materials to remain on a higher level.

Symrise intends to remain one of the most profitable companies in the industry in 2018 with an EBITDA margin of around 20 %.

The medium-term targets through to the end of the 2020 fiscal year remain in full effect, including a compound annual growth rate (CAGR) in the 5 to 7 % range and an EBITDA margin between 19 and 22 %. 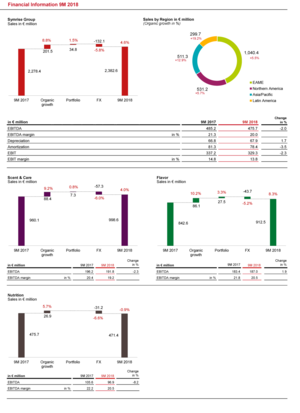