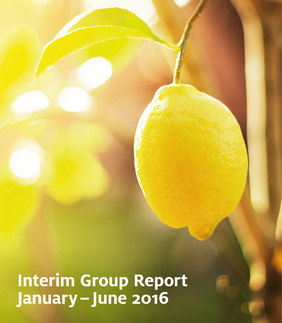 — Targets for 2016: outperforming market growth and now generating an EBITDA margin above 20 %

Symrise AG determinedly continued its successful course in the second quarter of 2016 and achieved substantial increases in sales and earnings. The Group benefited from strong demand in both segments. Growth was moreover driven by US-based Pinova Group, consolidated since the first quarter. In the first half year, Symrise increased its sales by 10 % (local currency: 16 %) to € 1,462.5 million (H1 2015: € 1,330.8 million). Earnings before interest, taxes, depreciation and amortization without special items from the Pinova acquisition and integration (EBITDAN) increased year-on-year by 8 % to € 323.3 million (H1 2015: € 300.3 million). With an EBITDAN margin of 22.1 %, Symrise is again among the most profitable companies in the industry.

Dr. Heinz-Jürgen Bertram, CEO of Symrise AG, said: "After the successful first half year, we are completely on track. We have seized opportunities and substantially increased our sales and earnings. Moreover, with a clear goal in mind, we have implemented a number of strategic initiatives to diversify our portfolio. We have added to our competencies, both in the flavors and fragrances business, which we intend to leverage in order to further strengthen our status as a market leader. Despite the political and economic volatility in some countries, we confidently look ahead to the second half of the year. In both segments we anticipate strong demand and again in 2016 we intend to outperform the global flavor and fragrance market."

Dynamic demand in the segments and regions
In the first half of 2016, Symrise increased its sales by 10 % (local currency: 16 %) to € 1,462.5 million (H1 2015: € 1,330.8 million). Alongside the continuing strong demand in the segments, this development was driven by Pinova Group, which was consolidated this year. Adjusted for portfolio effects, the Symrise Group posted an impressive 8 % plus in sales in local currency.

At the regional level, the strongest gains were recorded in North America, where sales were up 31 % in local currency, followed by Latin America with a 26 % increase. In the reporting period, the Asia/Pacific and EAME regions grew sales by respectively 12 % and 7 % in local currency. Emerging Markets reported a 17 % increase and accounted for 43 % of the Group's total sales.

High capacity utilization strengthens operating cash flow
The strong growth in earnings, combined with high capacity utilization, positively affected the operating cash flow, which increased to € 100.0 million (H1 2015: € 86.0 million). The ratio of net debt (including pension provisions) to EBITDAN stood at 3.6 (31 December 2015: 2.8). By the end of 2016, the company intends to reduce the ratio to a level between 3.2 and 3.5, and in the medium term plans to keep it in the range of 2.0 to 2.5. With an equity ratio of 33 % (31 December 2015: 38 %), Symrise continues to maintain a solid financial position.

Scent & Care segment
Scent & Care increased its sales by 22 % (local currency: 27 %) to € 667.8 million (H1 2015: € 546.5 million). The segment benefited in particular from high capacity utilization in its fragrance and cosmetic ingredients activities and from strong demand for menthol. Portfolio effects, such as the integration of Pinova, contributed € 110.5 million to Group sales. Even without these effects, Scent & Care achieved significant growth by 7 % in local currency.

Flavor & Nutrition segment
Flavor & Nutrition achieved a 1 % increase in sales (local currency: 8 %) to € 794.8 million. As in the previous quarter, growth was driven particularly by strong demand for savory and beverage applications as well as pet food.

Symrise is optimistic for the second half
After the successful first half, Symrise is confidently looking ahead to the second half of the year. Despite the political and economic volatility in some countries, the Group expects demand and growth dynamics to be generally strong. Therefore, Symrise confirms its objective of outperforming the global flavor and fragrances market, which is estimated to be growing at an annual rate of 2-3 %. Despite the volatility of certain exchange rates, Symrise aims to be among the most profitable companies in the industry. Consequently, Symrise has adjusted its profitability target and is now aiming for an EBITDA margin of above 20 %.

The Group also remains fully committed to the medium-term targets it has set until the fiscal year 2020: A compound annual growth rate (CAGR) in the range between 5 and 7 % and an EBITDA margin between 19 and 22 %.

Its sales of more than €2.6 billion in 2015 place Symrise as one of the global leading companies in the flavors and fragrances market. Headquartered in Holzminden, Germany, the Group is represented in over 40 countries in Europe, Africa and the Middle East, Asia, the United States and Latin America.