Symrise generates substantial gains in sales and earnings in 2015 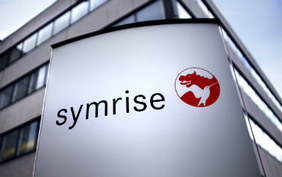 Dr. Heinz-Jürgen Bertram, CEO of Symrise AG, said: "In 2015 it was our decisive goal to substantially grow our business. We made targeted investments in growth and in expanding our competencies and know-how. Our portfolio clearly shows the benefits: It has expanded beyond our traditional product range and allows us to serve new, strategic business areas such as functional ingredients for everyday products. In 2015 we were once again one of the fastest-growing companies in our industry." He added, "A priority for us in 2016 is the cross-linking of our extensive expertise. In this way we will not only continue on track for success but also extend our competitive edge with a widely diversified portfolio."

Double-digit sales growth in all regions
Symrise benefited in the year under review from high capacity utilization and strong demand in all regions. Sales increased to € 2,601.7 million (2014: € 2,120.1 million). This represents growth of 23 % in reporting currency and 18 % at local currency. The Diana Group, which was acquired in mid-2014 and is now fully integrated, contributed sales of € 524.8 million (2014: € 233.9 million). Excluding the contribution of Diana, Symrise also generated strong sales growth with 10 % in reporting currency and 6 % at local currency.

Above-average growth in Emerging Markets
Symrise substantially expanded its position in Emerging Markets. In these fast-growing markets the Group increased its sales by 21 % (local currency) and generated 46 % of its total sales (2014: 47 %). The decrease as compared to the previous year reflects the regional sales mix of the Diana Group, which generates a higher sales proportion in Developed Markets.

Scent & Care segment
The Scent & Care segment achieved sales of € 1,073.7 million in 2015 (2014: € 980.4 million). This represents an increase of 10 % (4 % at local currency). All business divisions contributed to growth, in particular Aroma Molecules and Cosmetic Ingredients. Symrise benefited above all from strong demand for menthol and cosmetic active ingredients.

In January 2016 Symrise expanded its fragrance activities with the acquisition of US-based Pinova Holdings, Inc. This has given the company access to additional natural ingredients which are used in perfume compositions. Moreover, Symrise has expanded its forward integration in menthol to include cooling substances for oral care.

Good starting point for 2016 – mid-term targets confirmed
Symrise expects the economic environment for the current fiscal year to be challenging. Ongoing political conflicts in certain regions, heavy debt burdens of some countries and the low oil price are weighing down the global economy. With its worldwide presence and its diversified portfolio, the Group believes that it is very well positioned to continue its profitable growth course.

Symrise aims at outperforming the global F&F market in 2016, both at the Group level and in both segments. The Company has made a good start in the current fiscal year and will capitalize growth opportunities in Developed and Emerging Markets. Consequently, Symrise remains fully committed to the mid-term objectives extending to the end of 2020, namely a compound annual growth rate (CAGR) of 5–7 % and an EBITDA margin of 19–22 %. 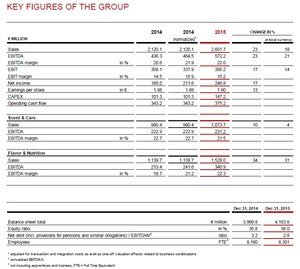