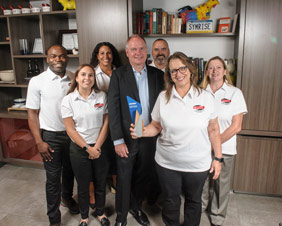 — U.S. insurer The Memic Group awards prize from among 21,000 policyholders
— Recognition of the company’s exceptional culture of safety

Symrise North America was honored with an award for exceptional on-the-job safety in its 18 locations. The Memic Group, specialized in workers’ compensation insurance, presents the “Safety Excellence Award” to just a few of its 21,000 policyholders. Symrise and seven more employers received the award this year.

The award ceremony took place on June 10, during The Memic Group’s Annual Meeting of Policyholders in Portland, Maine. The jury based its award of the prize to Symrise on its exceptional scores in the five categories of injury rates, rate of property damage, management support, company safety program, and culture. Among the sites evaluated were those in the U.S. states New York, Ohio and California, and in the Canadian province of Quebec. The award primarily recognizes the proactive company culture of Symrise, which ensures that the exceptional level of safety is guaranteed. The company makes sure that all employees participate in training in order to identify unsafe work processes and correct them before an accident can occur.

“Occupational safety is absolutely crucial for us,” says Brenda Murray, Senior Director of Environment, Health and Safety (EHS) & Process Management, Symrise North America. “Our employees are the most important resource we have, and we want to avoid that they to get hurt.” Murray accepted the award in Portland together with Bert Long, Director of EHS at Symrise North America. Michael Bourque, President and CEO of The Memic Group, presented the award.

Prize is a signal to talents and customers

Symrise has the highest standards for the safety of its employees. Both customers and potential employees pay attention to workplace safety, regarding it as a sign of the company’s quality. “Our goal is an accident-free workplace,” says Brenda Murray, who is responsible for process management at Symrise in the USA. “The award proves that we’re headed the right direction. But it’s important for us to stay vigilant so we can avoid injuries and provide our employees with a safe workplace.”

A video about the award is available at: https://youtu.be/7xxlaKm1sRA