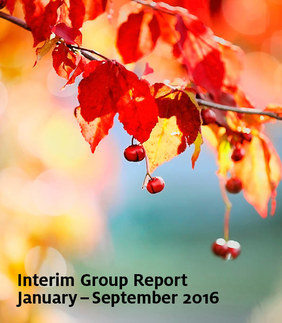 — High profitability with EBITDAN margin of 21.9 %

Symrise AG continued to benefit from strong demand and high capacity utilization in the third quarter. This enabled the Group to seamlessly continue the dynamic growth trend from the first half of the year. In the nine-month period, Symrise achieved strong gains in sales and earnings. The Group increased sales by 16 % (in local currency) to € 2,192.3 million (9M 2015: € 1,977.0 million). Earnings before interest, taxes, depreciation and amortization, normalized for one-time effects from the acquisition and integration of Pinova Holdings, Inc. (EBITDAN) were up 7 % to € 480.3 million (9M 2015: € 448.5 million). Despite the first-time inclusion of the Pinova Group since the first quarter of 2016, Symrise has maintained profitability at a very good level and achieved an EBITDAN margin of 21.9 % (9M 2015: 22.7 %). The Group is optimistic as it looks ahead to the remaining weeks of 2016.

Dr. Heinz-Jürgen Bertram, CEO of Symrise AG, said: "After the dynamic expansion of our business and the strong, profitable growth in the first nine months, we are anticipating the final spurt in 2016 with optimism. We will use the remaining weeks to push ahead with our innovations, maintain our market presence and align our products with our customers' needs. We confirm our aspiration for 2016 to grow faster than the market, to operate our business in a highly profitable way and thus to remain among the industry leaders."

Strong sales growth
In the first nine months of the year, Symrise increased its sales by 11 % to € 2,192.3 million (9M 2015: € 1,977.0 million). In local currency, the increase amounted even to 16 %. Both segments had a substantial impact on this strong performance. Purchased activities also contributed to sales, including those of the Pinova Holdings and those of Scelta Umami and Nutra Canada. Even without these additional contributions, the Group achieved significant organic sales growth of 8 % in local currency.

At regional level, Symrise experienced the strongest growth in Latin America, where sales were up 34 % in local currency. The second-strongest region was North America, at 27 %. Asia-Pacific saw a 12 % increase in sales, followed by EAME with an increase of 7 %. Symrise also recorded strong growth in the Emerging Markets, where sales were 17 % higher in local currency, accounting for 43 % of the Group’s total sales.

Continuously solid financial position
Cash flow from operating activities amounted to € 218.4 million (9M 2015: € 252.3 million); the decrease mainly resulted from build-up of strategic inventories. The ratio of net debt (including pension provisions and similar obligations) to EBITDAN stood at 3.5 (31 December 2015: 2.8). The Group is still committed to reducing this ratio to a range between 3.2 and 3.5 by the end of 2016. With an equity ratio of 32.9 % (31 December 2015: 38.0 %), Symrise continues to maintain a solid balance sheet.

Scent & Care sets the course for the future
Scent & Care, which comprises the fragrance and cosmetic ingredients activities, increased its sales, including contributions from the acquisition of Pinova Group, by 23 % (27 % in local currency) to € 997.2 million (9M 2015: € 812.3 million). The segment posted strong gains even without the Pinova effects, with an organic sales increase by 7% at local currency. Scent & Care reported particularly dynamic demand with cosmetic active ingredients and fragrances.

At operational level, Symrise used the third quarter to realign the Fragrances division. In future, rather than being organized by regions, the business with fragrance compositions will be organized globally by area of application, namely Fine Fragrances, Personal Care, Home Care and Oral Care. Moreover, the division is going to consolidate its capacities. Therefore, the US-American mixed operation in Chester, NY, will be closed by the end of the year and a production network at the location in Branchburg, NJ, will be created.

Flavor & Nutrition – profitability at new record level
Flavor & Nutrition achieved a sales growth of 3 %, and was up 9 % in local currency. The segment benefited particularly from good capacity utilization and strong demand for sweets and culinary applications. Business in the area of pet food also continued to grow. Excluding the purchased activities of Dutch Scelta Umami and Nutra Canada, and adjusted for the sale of the CAP pork specialties last year, the segment also posted strong organic growth with an increase of 10 % in local currency.

Sale of the industrial activities to French manufacturer DRT
In the course of the ongoing optimization of its portfolio, Symrise has decided to sell the industrial activities of the Pinova Holdings. Symrise will continue to operate the holding’s former Renessenz entity, which was acquired with the takeover. In the past months, these activities have been fully integrated into the Aroma Molecules division, securing access to strategically important natural ingredients. As a result, Symrise will offer a broader fragrance portfolio for perfume manufacturing going forward, expanding its market leadership in this area.

The unit, which operates under the brand name Pinova, with product solutions for technical applications in adhesives, paint, coatings as well as the tire and construction industries, will be acquired by DRT. The purchase price was set to US$ 150.0 million. Estimated sales for 2016 amount to US$ 111.0 million. The transaction is due to close at the end of 2016. The industrial applications have only limited points of reference with Symrise’s core business. However, Symrise has secured continued access to specific raw materials from renewable sources. DRT and Symrise will cooperate closely in the future under a joint supply agreement.

The synergies associated with the acquisition of Pinova Group will now be realized without the corresponding contributions of the industrial applications. The integration of the former Renessenz activities is expected to yield synergies of about € 15.0 million. Following the sale of the industrial applications, these can now be realized one year sooner, by the end of the fiscal year 2019.

Optimistic final spurt in 2016
Symrise is anticipating the fourth quarter of 2016 with optimism and expects good dynamics in both segments for the remaining weeks of the year. Some countries will still be impacted by economic instability and political tensions. However, Symrise expects to be able to counter these effects through its broad diversification and regional presence. The Group therefore remains committed to its 2016 objective of growing faster than the global flavors and fragrances market, which is estimated to grow by about 3 % this year. Symrise also confirms its target of an EBITDA margin of above 20 %.

The Group is furthermore fully committed to its medium-term targets for the fiscal year 2020: A compound annual growth rate (CAGR) of 5-7 % and an EBITDA margin of 19-22 %.

With sales of more than €2.6 billion in 2015, Symrise is among the global leaders in the market for flavors and fragrances. Headquartered in Holzminden, Germany, the Group is represented in over 40 countries in Europe, Africa and the Middle East, Asia, the United States and Latin America.