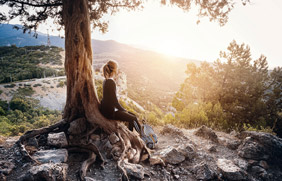 Symrise AG continued its profitable growth course in 2019 and achieved all of its targets for the year. With the acquisition of ADF/IDF, the Company furthermore reinforced its position in North America and expanded its product portfolio in the pet food market and in natural product solutions for the food industry. Taking portfolio and exchange rate effects into account, sales increased by 8.0 % to € 3,408 million (2018: € 3,154 million). As a result, Symrise was again one of the fastest growing companies in the industry. This strong performance was carried by good demand across all segments and regions. Earnings before interest, taxes, depreciation and amortization as well as normalized for one-time effects resulting from the acquisition of ADF/IDF (EBITDA(N)) increased by € 76.7 million to € 707.2 million.

"Symrise AG again posted strong growth in 2019. With the acquisition of ADF/IDF, we have continued to expand in fast growing, high-margin business areas. We have also further diversified our product portfolio in the attractive pet food market and expanded our position in North America. In addition, we made investments to expand our capacities over the course of the year and rolled out new technologies around the world. These targeted growth initiatives, combined with our disciplined cost management, are clearly reflected in our operational development in recent quarters," said Dr Heinz-Jürgen Bertram, CEO of Symrise AG. "Along with our customers, the capital market has also responded favorably to our performance. The share price has increased by 42 % in 2019. We want our shareholders to participate in our success again this year. At the Annual General Meeting of Symrise AG, the Executive Board and Supervisory Board will propose a dividend increase to € 0.95 per share."

In the year under review, Symrise benefited from good capacity utilization and strong demand in all segments and regions. Taking portfolio and exchange rate effects into account, Group sales increased by 8.0 % in the reporting period to € 3,407.9 million (2018: € 3,154.0 million). The organic growth rate achieved a clear plus of 5.7 %. As a result, the Group exceeded the average market growth rate in 2019, which was in the 3 to 4 % range according to estimates. The acquisition of the ADF/IDF Group, a leading US supplier of poultry and egg-based protein specialties, completed in November 2019, contributed approximately € 32 million to Group sales.

Despite higher expenses, Symrise increased its earnings before interest, taxes, depreciation and amortization as well as normalized for one-time effects resulting from the acquisition of ADF/IDF (EBITDA(N)) by a clear two-digit result of 12.2 % to € 707.2 million (2018: € 630.5 million). The deal resulted in one-time acquisition and integration expenses of € 16.3 million in 2019. The markets for raw materials remained tense, especially in the first half of the year. Notwithstanding the above, Symrise continued to invest in global capacity expansion. Major investment projects included the new manufacturing site in Nantong (China), the expansion of production capacity for menthol and natural extracts in the USA, and for pet food in Colombia and France.

Symrise achieved very strong profitability in the fiscal year 2019 and significantly exceeded the previous year's level, with an EBITDA(N) margin of 20.8 %. As a result, Symrise was once again one of the most profitable companies in the industry.

Symrise grew its normalized Business Free Cash flow  by 53 % to € 476 million in the year under review (2018: € 312 million). This represents 14.1 % of sales, as compared to 9.9 % in the previous fiscal year. This significant increase can be attributed above all to the strong gain in net income for the period and a below-average rise in working capital.

The equity ratio increased from 39.5 % to 41.4 % at year-end. Symrise is thus in a very good financial position.

In the Scent & Care segment, sales in reporting currency grew by a positive 7.2 % to € 1,419.1 million (2018: € 1,324.1 million). This represents an increase of 5.6 % in organic terms. Dynamic growth was seen particularly in the Fragrances division, which experienced strong demand for fine fragrance products. This was reflected in double digit percentage growth in fine fragrances applications, supported by strong demand above all in EAME and Latin America. The Cosmetic Ingredients and Aroma Molecules divisions also posted gains.

Flavor achieved a 5.6 % increase in sales to € 1,257.3 million in reporting currency (2018: € 1,191.1 million). After adjusting for exchange rate effects, the organic growth amounted to 3.8 %. This positive trend was carried by all regions and application areas. Flavor benefited in particular from dynamic demand in Asia/Pacific, where the segment achieved organic growth in the high single-digit percentage range. This was driven by flavorings for applications for sweet and beverage products, above all in Indonesia, Malaysia and China.

The Nutrition segment achieved in 2019 a 14.5 % increase in sales to € 731.5 million after sales of € 638.8 million in 2018. This included a total of € 32 million in sales from the ADF/IDF Group. Through the initial consolidation of the Group in November 2019, the fourth quarter showed a remarkably strong sales increase of 28.7 %. The segment also achieved significant organic growth. Once again, this growth was driven by product solutions in Pet Food. The strongest impetus came from North America and Latin America, where growth was in the double-digit percentage range.

Symrise looks ahead to 2020 with confidence

In 2020, the Company aims to yet again achieve significantly stronger growth than the relevant market for fragrances and flavors as well as cosmetic ingredients, which is projected to grow at a rate of around 4 %. The Company expects all of its segments to grow notably faster than the global market. Assuming raw material costs at their current levels and a stable EUR/USD exchange rate, Symrise currently anticipates an EBITDA margin of over 20 % in all segments for the current fiscal year.

Overall, with its global presence, diversified portfolio and proven strategy, Symrise believes it is well positioned to achieve these growth ambitions. The Company plans to continue expanding in fast growing, high-margin business areas in the future, combining organic investments with targeted acquisitions. In addition, Symrise will remain committed to its disciplined cost and efficiency management.

Symrise believes that it is very well positioned to achieve the targets updated at the beginning of 2019. By 2025, the Company plans to increase its sales from € 5.5 billion to € 6.0 billion by means of organic growth at an annual rate of 5 to 7 % (CAGR), combined with targeted complementary acquisitions. Long-term, Symrise aims to achieve an EBITDA margin within the target corridor of 20 to 23 %. 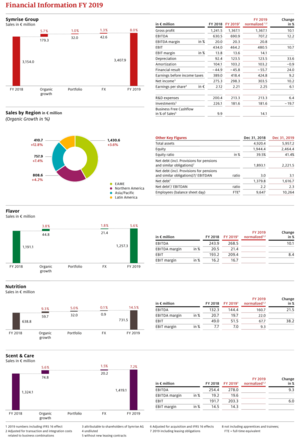