Committed to the environment: Symrise achieves second place in the German CSR Awards 2018 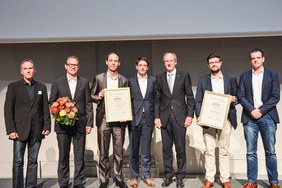 — The Holzminden-based company obtains the second place for its environmental commitment
— The jury praised the company’s focus on biodiversity, reduced carbon emissions and waste prevention
— Recognition of the groundbreaking sustainability strategy of the company

The expert jury of the German CSR Award 2018 distinguished Symrise with a second place in the category “Environmental Commitment.” For Symrise, making an outstanding contribution to the preservation of biodiversity is a given. In the end, the Holzminden-based company also benefits greatly from the diversity of natural raw materials. For over 25 years, the company has been actively involved in many regions around the globe to protect the environment. Now, the sustainability strategy of the fragrance and flavor experts from Holzminden has been distinguished once again.

Over 10,000 raw materials for more than 30,000 products: Symrise has far more than one reason to support the preservation of natural resources. To preserve the socioeconomic value for the company and for coming generations, the team in Holzminden works consistently on the transformation of the supply chain toward an environmentally and socially responsible value chain – and has been doing so for many years. In 1991, Symrise implemented a management system that contributes to protecting biodiversity, using resources in a more sustainable manner and sharing the success fairly with local communities. The company has continued to develop this process and expanded it through a resource efficiency strategy in 2010. The core of the current sustainability strategy consists of four pillars: “Footprint,” “Innovation,” “Sourcing,” and “Care.” They give the FISC Agenda of Symrise its name and outline how the company aims to increase its social value – while at the same time minimizing the adverse effects of its business activities.

The consistently sustainable approach is at the forefront of the German industry and has now been recognized with a second place in the German CSR Awards 2018. “The company uses mostly plant-based base materials that are from the most diverse ecosystems, such as the Amazon rainforest, and that are protected locally through a biodiversity agenda. This way, Symrise promotes environmentally effective cultivation practices in the countries of origin, grants microcredits and invests in educational and professional opportunities, all of which demonstrably improve the socioeconomic conditions of small-scale farmers,” explained the jury when announcing its decision, adding that, “In terms of value creation, the company was able to reduce by one third both its carbon dioxide emissions and the creation of dangerous waste and wastewater in the past few years.”

This is a corporate social responsibility (CSR) strategy that Symrise constantly puts to the test: The Holzminden-based fragrance and flavor experts regularly face the expertise of recognized specialist juries. For example, the company received the German Sustainability Award in 2012 for its involvement in vanilla production in Madagascar. For the German CSR Award 2018, one of the entries submitted by Symrise was a sustainability project in Italy. The company collaborated with Capua Srl, a raw material supplier, to establish an extensive network for the sourcing and processing of citrus fruits in the region of Calabria. In addition to the Mediterranea University of Reggio Calabria, this network is composed of the bergamot producers’ consortium Unionberg and over 300 farmers. The goal of the company is the long-term procurement of all its citrus-based raw materials in an entirely sustainable manner in order to offer its customers transparent and future-proof fragrance and taste solutions.

The Corporate Sustainability department and the Sustainability Board are largely responsible for the implementation of the sustainability strategy of Symrise; together. Together, they define climate protection goals and secure measures with which these objectives can be reached. The Chief Sustainability Officer and appointed officers for Environment Health and Safety at all locations around the world push forward the strategy of the company and include heads of production, research teams and employees from all levels into the program. This allowed Symrise to reduce its carbon emissions by an average of four percent per year. And the Holzminden-based company wants more: to reduce its absolute carbon emissions by 18 percent by 2030. “We are proud to be one of the first companies in the fragrance and flavor industry to pursue a proven climate strategy that has been repeatedly confirmed as best-in-class,” says Sascha Liese, Symrise Manager Corporate Sustainability. “Being distinguished with the German CSR Award for environmental commitment encourages us to continue on this path. This second place is a special honor for us.”