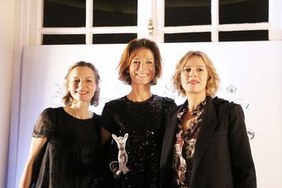 — Blind smelling to distinguish the winners

Emilie Coppermann has received the prestigious Prix François Coty on December 3, 2018, in the Château D’Artigny. The president of the François Coty Association, Véronique Coty, has presented the Award during a festive ceremony. The prize is designed to highlight the extraordinary character of the laureate and her creative work.

The Château D’Artigny is the former home of the founder of the Prix François Coty. The historic place provided an elegant setting for the award ceremony. This year, Emilie Coppermann, Master Perfumer with Symrise Paris, took home the Lalique trophy, La Vitesse. “I feel very honored to receive this highly coveted prize within the perfumery industry. To me, it comes as a precious token for my creative work as perfumer. It will inspire me to continue my fragrant path for a better living through scent”, says Emilie Coppermann. The award ceremony was preceded by an olfactory conference, hosted by Patricia de Nicolai, President of the Osmothèque de Versailles and Jean Kerléo, its founder.

The association François Coty, chaired by Véronique Coty, is dedicated to highlighting the extraordinary character of perfumery’s nobility to which its founder has contributed significantly. One of its major missions is to choose one laureate each year for the François Coty Award to reward a great perfumer. Perfumers qualify for the award if they have created a perfume of certain renown, launched the year prior to the award. The jury determines the laureate by smelling and evaluating the perfume anonymously. Former laureates include Maurice Roucel, Alberto Morillas, Dominique Ropion and Christine Nagel.

For over 20 years, Emilie Coppermann has been creating perfumes for the luxury class as well as niche brands. Initially, she was drawn to the idea of creating fascinating fragrances when she was 13 years old. She systematically pursued her dream and wound up studying chemistry. Her talent was recognized by Jean-Louis Sieuzac & Dominique Ropion, perfumers at Symrise (ex-Florasynth), who took her under his wing. They taught her the fundamentals of perfumery. Master Symrise perfumer Maurice Roucel was another of her mentors.

Emilie is especially passionate about woody scents in all their diversity. They form the base fragrance in many of her creations. Alternately, strong, radiant, masculine and feminine notes come together to create impressive compositions. “We congratulate Emilie on the Prize. It emphasizes her outstanding talent as perfumer that is recognized by the industry. She inspires her colleagues with her own creative work and she created many winning fragrances for Symrise, making her a key factor for our fragrance’s success”, says Ricardo Omori, Senior VP Global Fine Fragrance at Symrise.