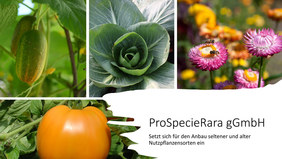 ProSpecieRara and Symrise have formed a collaboration for the sustainable use of plant genetic resources in Germany. The agreement will serve as a role model to ensure that some of the benefits that result from the use of plant genetic diversity flow back to their conservation. The agreement aims at motivating further companies to also make a voluntarily contribution to biodiversity.

The progressive loss of biodiversity in plants used in agriculture presents a great risk to global nutrition. A wide range of species with varying genetic characteristics allows agriculture to quickly adapt to changing environmental conditions. These include climate change, water scarcity and the spreading of plant diseases.

Conservation partnership as a role model

The collaboration of ProSpecieRara and Symrise aims at the conservation and sustainable use of traditional crops and cultivated plants. It rests on two cornerstones. First, Symrise supports projects that conserve and promote plant genetic resources for food and agriculture. One of these projects includes the creation of variety collections. In addition, Symrise directly benefits from crop diversity within its core business. “Ancient and endangered crops serve as a valuable source of good taste. They therefore provide valuable inspiration for the creation of unique flavor compositions,” says Bernhard Kott, CSO at Symrise. “We too want to discover further potential uses for our fosterlings,” adds ProSpecieRara director Béla Bartha. “To do this, we will evaluate our varieties and make planting material available as part of the agreement.”

The partners contribute their respective expertise and pursue a common purpose. They want to use crop diversity sustainably, thereby implementing the principle of the United Nations’ Convention on Biological Diversity and the Nagoya Protocol.

According to Swiss and German law, Symrise could use ProSpecieRara seeds and plants for commercial research and development without a requirement to make a contribution to biodiversity. Here, the contract comes in. Symrise declares that, within the meaning of the Convention on Biological Diversity, it will share benefits equitably for the use of ProSpecieRara varieties in the form of an upfront payment. This fully benefits the conservation work. Should a product based on the provided genetic resources later get commercialized, an additional voluntary equitable sharing of benefits will take place. This could, for example, relate to a flavor composition based on traditional crop varieties that a manufacturer uses to produce food products or beverages.

Symrise and ProSpecieRara consider crop diversity to be an important common good: Everyone should be able to freely access it. For this reason, the company is waiving patent applications. This applies to both the biological resources made available by ProSpecieRara as part of the collaboration and for their components. Symrise also waives its right to patents on the direct use of biological resources, for instance as plant extracts in food or as aromatic fragrance ingredients in cosmetic products.

Motivation for other players

To combat the loss of crop diversity, ProSpecieRara and Symrise consider tying the commercial use of plant genetic resources to the payment for a fair share of benefits a promising practice. “We want that this exemplary collaboration encourages more companies to join in,” says ProSpecieRara Managing Director Béla Bartha. “To conserve biodiversity permanently, we urgently need the wide-ranging commitment of business and society.”

ProSpecieRara was established as a foundation in Switzerland in 1982. Since then, it has promoted and conserved the genetic, cultural and historical diversity of over 4,500 cultivated plants and 38 livestock breeds. To achieve its goals, ProSpecieRara maintains a wide-ranging network of conservationists consisting of more than 3,500 volunteers. The foundation supports use of conserved diversity via its own label and works to promote free access to these genetic resources on the political level. In 2011, ProSpecieRara Deutschland was established as a nonprofit limited liability company. The field of activity in Germany is initially focused on crop plants.