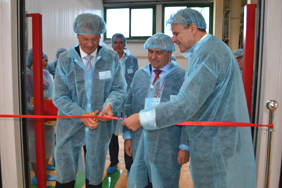 Symrise is launching a production line for liquid flavorings in the Russian town of Rogovo, south of the capital city of Moscow, where the company began producing its own dry taste solutions a few years ago. On July 11, 2019, the Holzminden-based company opened the expanded production site with an inaugural ceremony. Russian customers will now receive regionally produced taste solutions for sweet and dairy products as well as beverages. These supplement the range of dry taste solutions for snacks and ready meals.

Representatives from industry, politics and local dignitaries attended the inaugural ceremony. The head of management of the Rogovo site gave a speech in which he highlighted, among other things, the special neighborly relationships the site has. Representatives from the German Embassy, the German Chamber of Foreign Trade and the press also took part in the ceremony. Symrise in turn used the opportunity to greet customer representatives who will benefit from use the products from the new line. “We invited our guests on a tour through the plant, where we were also able to inspire them with our culinary offerings. Together, we tasted samples that contain our liquid flavorings,” says Nelli Tazina, plant manager at Symrise Rogovo.

The liquid flavorings from the new production facility can be used by the consumer goods industry in sweets, dairy products and beverages. This expands the target customer group, which until now mostly comprised suppliers of snacks and ready meals. At the same time, Symrise is optimizing its processes with the new production line, which manufactures products sequentially preventing cross-contamination and guaranteeing high purity in the final taste solution. The plant will produce around 1,800 tons of flavorings per year, in containers ranging from 100 kilograms to 4,000 kilograms.

Symrise opened its first representative office in Russia in 1995 and has been operating an application lab in Moscow since 2002. In 2011, the company was the first in the industry to start up local production in Russia, which it expanded in 2015 with a fifth production line. Now, another line is being added in the same building – with a new product offering. The technological factory equipment installed was sourced from Russia and other European countries. “This investment clearly demonstrates our commitment to the region and the country. We strongly believe in the positive development of the Russian economy,” says Stephan Schulte, Managing Director of Symrise Rogovo. “Our company got involved in the growing market early on and has successfully developed its business in Russia. Local customers have already had positive experiences with dry taste solutions from Symrise.”

Shown in the picture f.l.t.r.