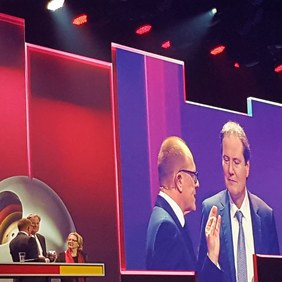 Symrise’s consistent commitment to sustainability was awarded first place in the category “Germany’s most sustainable large corporations 2019.” In addition to Symrise’s commitment to climate protection, the decisive factors were mainly its efforts to preserve biodiversity and to support the living conditions of small-scale farmers along the supply chain who consistently meet the highest ecological and social standards. After receiving an award in 2012 and being a finalist in 2016, Symrise has now received the coveted prize for a second time.

“Symrise not only uses its significant influence to secure bio-based raw materials for its own needs. At the same time, it supports threatened ecosystems with comprehensive sustainability management that has been implemented in all core processes of the company,” the jury noted in its decision. The company realized early on that the need for natural and sustainably produced raw materials is constantly growing, and that these materials are also threatened by climate change and the decline of biodiversity.

For the approximately 10,000 raw materials that Symrise uses, the company predominantly draws on plant-based materials. These come in part from sensitive ecosystems, such as the Amazon rainforest, which Symrise is helping to protect with its approach to sustainability. For years now, the pioneering company based in Holzminden has been active in its growing regions across all continents and has supported the local populations. Projects of special note include sustainable vanilla cultivation in Madagascar and responsible sourcing of bio-based raw materials for cosmetic ingredients in the Amazon region of Brazil, in the context of which the company supports 5,500 local small-scale farmers. In these and other regions, Symrise educates farmers in environmentally effective cultivation practices, grants microcredits and invests in educational and professional opportunities, all of which demonstrably improve the socioeconomic conditions of the small-scale farmers.

“We see the confirmation of our strategy through the German Sustainability Award as a great honor, and this motivates us to continue,” Bertram says. “As Germany’s most sustainable large corporation, we take our position as a role model seriously. We support biodiversity in our growing regions and support local farming communities. In the process, environmental aspects also play a decisive role. In the regions of origin of our raw materials and in our production sites, we are implementing comprehensive measures to protect the environment. And it has paid off. For example, in 2016 we had already reached the goals for our environmental footprint that we had set for 2020. That’s why we have now defined even more ambitious sustainability objectives for ourselves. For example, by 2030 we want to reduce our total CO2 emissions by 18 percent.” In 2017, Symrise was the first company in its sector to commit to a climate strategy that meets the strict criteria of the Science Based Targets Initiative (SBTI), whose participants commit to setting a science-based climate goal aligned with the objectives of the Paris Agreement to limit global warming to a figure well below 2°C. The jury of the most important sustainability award in German-speaking countries especially commended the dedication of the company management within the supply chain and the company’s continual improvements in its own operations.