Symrise off to a strong start in 2016 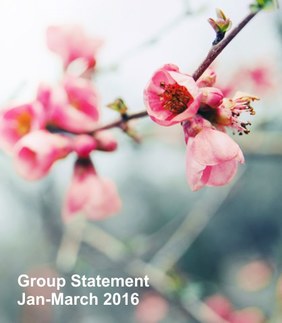 — Satisfactory growth in both segments

The fiscal year 2016 has started off well for Symrise AG. The Group recorded dynamic demand from customers in both segments and across all regions, realizing gains in sales as well as earnings. Moreover, US-based Pinova Holdings, Inc., which was acquired at the beginning of the year, was consolidated for the first time. In the first quarter, Symrise increased Group sales by 10 % to € 731.8 million (Q1 2015: € 668.0 million). Earnings before interest, taxes, depreciation and amortization without special items from the Pinova acquisition (EBITDAN) increased by 6 % to € 158.5 million (Q1 2015: € 148.8 million). With an EBITDAN margin of 21.7 % (Q1 2015: 22.3 %), profitability remained on a high level.

Dr. Heinz-Jürgen Bertram, CEO of Symrise AG, said: "Despite high volatility in some markets, Symrise achieved solid first-quarter growth and is right on track. We posted gains in all regions and both segments. After the successful start to the year, we are generally confident as we look ahead to the coming months. We will continue pushing ahead with our planned growth projects, above all the integration of Pinova Holdings, the ongoing crosslinking of our expertise, and the targeted expansion of capacity."

In the first quarter, Symrise increased its sales in reporting currency by 10 % to € 731.8 million (Q1 2015: € 668.0 million). In local currency, sales increased by 14 %. The Group benefited especially from double-digit growth rates in fragrances and strong demand for beverage and savory applications.

At the regional level, Symrise again experienced the strongest growth in Latin America, where sales were up by 31 % in local currency. The second-strongest region was North America, with a 30 % increase, followed by Asia/Pacific (11 %) and EAME (4 %). Symrise also increased sales in Emerging Markets, with a plus of 15 %.

Scent & Care benefits from strong performance in fragrances and cosmetics

Sales in the Scent & Care segment rose by 22 % to € 344.3 million (Q1 2015: € 282.8 million). This represents a rise of 26 % at local currency. The growth was driven in particular by strong demand for cosmetic ingredients and menthol. Pinova, with sales of € 53.6 million, was consolidated in this segment for the first time. Without Pinova, sales growth in local currency was 7 %. The integration of Pinova was initiated immediately in January. The related optimization of the production processes is scheduled for completion by 2020. Symrise expects to realize synergies totaling € 20 million.

Flavor & Nutrition increased sales by 1 % to € 387.5 million (Q1 2015: € 385.3 million). This represents a rise of 6 % at local currency. In the year-on-year comparison it is important to note that the previous year's figure still included sales from the Diana CAP business, which meanwhile has been sold. Growth drivers in the first quarter were beverage and savory applications as well as pet food.

Optimistic outlook for the remainder of 2016

Despite ongoing political conflicts and the economic volatility in some regions, Symrise is overall confident for the fiscal year 2016. The Group expects demand to remain solid in all regions and both segments. Against this backdrop, Symrise has reaffirmed its objective of outperforming the global flavor and fragrances market, which is estimated to be growing at an annual rate of 2-3 %. Moreover, the Group aims to achieve an EBITDA margin of about 20 %. The Group also remains fully committed to its medium-term targets.