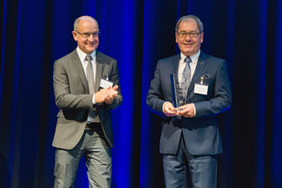 As part of the DQS Sustainability Conference held in Düsseldorf on Wednesday night, the fragrance and flavoring manufacturer Symrise was recognized with the German Award for Excellence for international social commitment. The globally operating Group headquartered in Holzminden (Lower Saxony) impressed the panel with its social commitment in developing and emerging countries. In addition, the audience awarded a prize for the most impressive sustainability short film. Symrise received 51 % of the votes for its vanilla video about its commitment in Madagascar.

With the German Awards for Excellence, DQS annually recognizes companies that assume a leading role in the area of sustainability. The awards are conferred in 15 different categories for corporate social and environmental responsibility. The goal is to encourage a greater commitment to sustainability among businesses.

This year, Symrise received the German Excellence Award in the “Society Engagement International” category. The award recognizes international projects that promote the dialogue between companies and society and strengthen weaker civil societies in certain regions. Symrise received the award for its commitment to grower communities in developing and emerging markets like Madagascar and Ecuador, where important raw materials for the flavor and fragrance market such as vanilla, vetiver and other tropical plants are grown. In cooperation with international and regional aid organizations, other companies and government agencies, Symrise promotes stable living conditions, education and health for the people and preservation of the local biological diversity.

“Social engagement at a local level in developing countries is not an optional extra for us, rather it is a decisive component of our economic success,” says Hans Holger Gliewe, CSO at Symrise. “Supporting the local people ensures our long-term growth and enhances our efficiency.”

In addition, the audience awarded a prize to the film they judged to be the most convincing on the topic of sustainability. And Symrise was able to do so. The company, based in Lower Saxony, Germany, received 51 % of the votes for its entry about its work in Madagascar. The film reported on the lives and work of small-scale vanilla farmers in Madagascar, whose main source of income is vanilla. 7,000 small-scale farmers produce high-quality crops for Symrise. In order to improve the lives and prospects of farming communities in Madagascar, Symrise recognized the need for an integrated sustainable approach for the farmers and therefore introduced a range of progressive measures regarding health care, education and diversification of crops

“We are delighted that our schooling program and other initiatives have made a real contribution to life in Madagascar,” explains Hans Holger Gliewe, CSO at Symrise. “The vanilla farmers and their families now have the opportunity to improve their standard of living in the long term. In this way we are generating added value for all parties in the supply chain, starting from the origins of the raw materials.”

Symrise is a global supplier of fragrances, flavorings, cosmetic active ingredients and raw materials, as well as functional ingredients. Its clients include manufacturers of perfumes, cosmetics, food and beverages, the pharmaceutical industry and producers of nutritional supplements and pet food.

Its sales of more than € 2.9 billion in the 2016 fiscal year make Symrise a leading global provider in the flavors and fragrances market. Headquartered in Holzminden, Germany, the Group is represented in over 40 countries in Europe, Africa, the Middle East, Asia, the United States and Latin America.

Symrise works with its clients to develop new ideas and market-ready concepts for products that form an indispensable part of everyday life. Economic success and corporate responsibility are inextricably linked as part of this process. Symrise – always inspiring more…Symrise, always inspiring more...
www.symrise.com