Symrise with a successful start in 2017 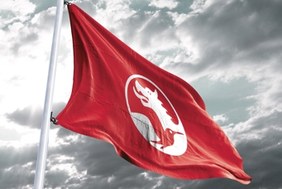 Symrise AG started successfully into the fiscal year 2017. The Group seamlessly continued its strong performance from the previous year and again significantly increased sales and earnings in the first three months. Contributing to this development was strong demand in all segments. In the first quarter, Symrise increased its sales by 4.6 % to € 765.2 million (Q1 2016: € 731.8 million). Adjusted for portfolio and exchange rate effects, the Group achieved organic growth of 5.3 %. Earnings before interest, taxes, depreciation and amortization (EBITDA) were up by 4.4 % to € 165.5 million (Q1 2016 EBITDAN: € 158.5 million). With an EBITDA margin of 21.6 %, Symrise continued to operate highly profitable (Q1 2016 EBITDAN margin: 21.7 %).

"The targeted investments to expand our portfolio, the further development of our customer relationships, and the efforts to build our market presence continued to pay off in the first quarter. We seamlessly maintained our strong performance into the first months of 2017, expanded our existing business in all segments, and also gained new customer projects. There is therefore every reason to feel confident as we look forward to the coming months. We plan to continue pushing ahead with our growth initiatives and to keep expanding our market position. For 2017 we are planning a number of projects. These will include gaining broad access to natural, sustainable raw materials and the expansion of our capacities in Holzminden as well as internationally," said Dr. Heinz-Jürgen Bertram, CEO of Symrise AG.

The Symrise Group generated sales of € 765.2 million in the first quarter (Q1 2016: € 731.8 million). This represents an increase of 4.6 % in reporting currency compared to the first quarter of 2016. Adjusted for portfolio effects, in particular the sale of Pinova Inc. in December 2016, and for exchange rate effects, Group sales increased organically by 5.3 %.

Profitability remains high with an EBITDA margin of 21.6 %

Earnings development was satisfactory in the first quarter. Earnings before interest, taxes, depreciation and amortization (EBITDA) were up by 4.4 % to € 165.5 million (Q1 2016 EBITDAN: € 158.5 million). This includes a one-time gain from a purchase price adjustment of € 4.7 million related to the sale of Pinova Inc. The Group's EBITDA margin amounted to 21.6 % and thus remained at a high level (Q1 2016 EBITDAN margin: 21.7 %).

After adjustment for the Pinova portfolio effect, the Aroma Molecules division posted the strongest first-quarter sales growth within the Scent & Care segment. Growth drivers were in particular the high demand for fragrance ingredients and menthol.

Fine Fragrances as part of the Fragrance divisions also made good contributions to growth, increasing sales at double-digit rates in Asia. Satisfactory growth was also achieved in Latin America and EAME. The region Latin America posted double-digit growth in the application area of Home Care products as a result of new business with global and regional customers. The EAME and Asia/Pacific regions experienced lower demand compared to the same quarter a year earlier. Sales in Oral Care were significantly higher in North America and EAME, benefiting in particular from new business with international customers. Symrise experienced moderate growth in EAME with fragrance compositions for Beauty Care products. The regions North America, Latin America and Asia/Pacific were below our expectations due to lower demand.

Demand for sun protection products in the Cosmetic Ingredients division was down slightly in the first quarter. However, this trend was offset by dynamic growth in sales of cosmetic ingredients.

EBITDA in the Scent & Care segment amounted to € 71.9 million in the first quarter (Q1 2016 EBITDAN: € 72.5 million). This includes a one-time gain from a purchase price adjustment of € 4.7 million related to the sale of the Pinova industrial activities. The EBITDA margin was 21.6 % as compared to 21.0 % in the reference period.

The Flavor segment, which includes aroma applications, generated sales of € 270.2 million (Q1 2016: € 250.2 million). This represents an increase of 8.0 % as compared to the prior-year quarter. Organic growth stood at 8.8 %. All application areas achieved significant sales increases in the first quarter.

Among the regions, the main growth driver was EAME, which achieved a double-digit sales increase. Important contributions to growth came especially from the Sweet and Savory Business Units in the national markets of Germany and France as well as North Africa. Beverages also showed solid growth, especially in Germany as well as the Near and Middle East.

In the Asia/Pacific region, sales in applications for sweets were up substantially in the national markets of Japan, India and the Philippines, but increased only moderately in Indonesia.

The region Latin America performed generally well, benefiting especially from double-digit growth rates in Beverages in Argentina. In Brazil, demand in that area was generally more restrained in the first three months of the year.

In the region North America, Symrise continued with the successful expansion of its existing business. In addition, demand grew due to product launches.

The Nutrition segment, which includes the Diana division, with applications for foods, pet food and baby food as well as probiotics, achieved strong growth and a 17.8 % increase in sales to € 161.8 million (Q1 2016: € 137.3 million). Excluding portfolio effects, the segment experienced an organic sales increase of 9.6 %.

Strongest growth rates were achieved with applications for pet food, with double-digit gains. At the regional level, the largest increases in sales were seen in Latin America, with the national markets of Argentina, Mexico and Columbia, followed by the EAME region.

Sales in applications for food ingredients also showed a very satisfactory development due to strong demand in North and Latin America. Strong organic growth was achieved in both of those regions. In addition, important projects with global and regional customers were successfully implemented.

In Probiotics, Symrise increased sales through the acquisition of the US company Nutraceutix. The application area achieved double-digit growth even after the acquisition effects, especially in the regions North America and EAME.

Symrise looks ahead to 2017 with confidence

After a good start to the year, Symrise is confirming its growth and profitability targets for the current fiscal year. The Group remains confident that it will continue to achieve growth on a sustainable basis in 2017, and aims to substantially outperform the relevant market – which is projected to grow at a rate of about 3 %. The various investment projects to increase capacity in Holzminden as well as internationally, especially in growth markets, will continue to facilitate organic growth. Moreover, Symrise aims to be highly profitable, with an EBITDA margin of approximately 20 %.

The medium-term targets through to the end of the 2020 fiscal year remain in effect, including a compound annual growth rate (CAGR) of 5-7 % and an EBITDA margin of 19-22 %.

Symrise works with its clients to develop new ideas and market-ready concepts for products that form an indispensable part of everyday life. Economic success and corporate responsibility are inextricably linked as part of this process. Symrise – always inspiring more... 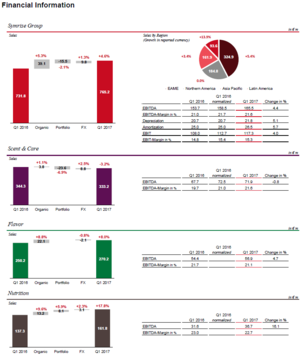